‘Give all athletes your support’ 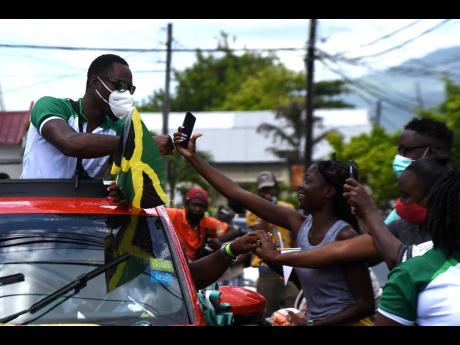 Kenyon Hemans/Photographer
It was a hero’s homecoming for Hansle Parchment, Olympic gold medallist in the 110m hurdles at the Tokyo Games, in his birth parish of St Thomas yesterday. 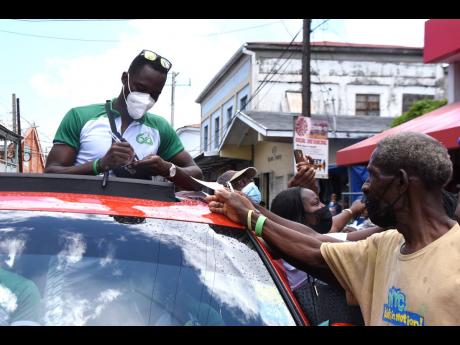 Kenyon Hemans/Photographer
Hansle Parchment signs autographs during a stop on his motorcade yesterday.
1
2

Olympic gold medallist Hansle Parchment is encouraging the undiluted support of all athletes, regardless of how one may have performed.

The shine of his medal dimmed in comparison to the intensity of the love the 31-year-old champion hurdler has been receiving from supporters, locally and worldwide.

And while he has humbly expressed pure gratitude for the appreciation he has been privy to, Parchment emphasised the importance of always cheering on others, even in their down season.

Parchment, who clocked a season best of 13.05 seconds in the 110m hurdles, was one of the only two male Jamaican Olympic qualifiers to medal at the recently concluded Tokyo 2020 Games. Parchment’s teammate, Ronald Levy, earned bronze alongside him. Both have earned the love of their countrymen.

However, the Olympian is disheartened that his non-medalling teammates are at the receiving end of harsh criticisms.

“We know everybody likes a winner and when you’re winning the support is huge, everybody comes on board. And while that’s fun, I want to encourage support for those who are not on top to motivate them as well,” said the Olympic champion.

“We have talents all around and other athletes who, if they are given more support, will be one of the biggest [athletes] as well, so I want us to push and keep motivating and supporting everyone to push forward and be the greatest that they can be.”

Parchment was speaking yesterday during his homecoming ceremony organised by his alma mater, the St Thomas-based Morant Bay High School, and its Alumni Association.

The ceremony was held at the institution and saw several stakeholders – including current and former members of parliament of St Thomas East, Dr Michelle Charles and Fenton Ferguson, respectively; Parchment’s sponsor Grace Foods; students and alumni, including Olympian Juliet Cuthbert Flynn and TVJ’s Dionne Jackson Miller – who all shared their congratulations.

The ceremony was preceded by a tour of several areas of the parish with brief stops at key points.

‘CAN ANYTHING GOOD COME OUT OF ST THOMAS?’

Dark skies and rainfall were not enough to discourage residents who had weathered the climate to steal a look at and support their local star.

Among them was Lilith Warren-Salmon. With a voice that betrayed that she had been shouting her praise for the athlete, she said, “Rain or shine I had to come out come show my support because we can’t wait until people dead before we celebrate and give blessings. Today, I’m out here in the rain because he’s so special. Him come from Port Morant, St Thomas. Can anything good come out of St Thomas? Of course, Parchment.”

“Come through Parchy pon the bad road!” shouted another supporter, whose wet clothes spoke volumes of how elated she was to be associated with the gold medallist.

She continued, “I’m so proud of him. I feel like a my pickney. A so we must celebrate each other. The road too bad, though; them need to fix it. Mi vex bad, but a it we have, so is it him have to come pon.”