Residents dying for Bull Park River to be desilted 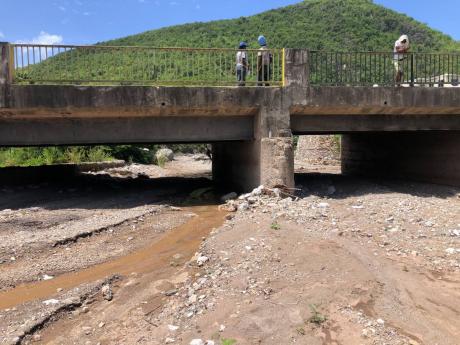 Photo by Andre Williams
Residents of Ten Miles in Bull Bay, St Andrew, are blaming the Carib Cement Company for the pile up of silt in the Bull Park River. However, the company said it is not to be blamed as it has not been operating in the area for several years.

Residents of Ten Miles in Bull Bay, which borders two constituencies – East Rural St Andrew and Western St Thomas – say they feel slighted after years of neglect by their political representatives and the Caribbean Cement Company with the lack of dredging of the Bull Park River.

The residents staged a peaceful protest yesterday to register their discontent, noting that with the Atlantic hurricane season under way, the they cannot wait until disaster strikes or for the area to be declared an unsafe zone before the river is desilted.

“Any time rain come down, things come down in a it, and a years. This ya gully yah, a truck used to can drive underneath it. When here (under the bridge) is blocked, the whole place flood out,” a resident pointed out.

Chad Bryan, communication and social impact coordinator at Carib Cement, noted that the company understood the concerns being expressed; however, the company was not to be blamed.

“It must be made clear that since 2015, the company has not been operating in the mentioned area, which means that our current activity has no effects on the sedimentation of the river,” the company said in a release sent to our news team.

Carib Cement argued that the rehabilitation of the former gypsum quarry complies with all the company’s and Government’s environment protection policies.

However, this did not sit well with residents, some of whom said that their National Housing Trust-built homes, for which they have titles, are under threat.

“Fi dem thing is that they are not mining now, but is the years of stock pile weh dem mek up there coming down same way. Any time water come, if we have two weeks of rain, we don’t have any bridge,” a disgruntled resident told The Gleaner.

Some residents have also pointed the finger at the National Works Agency (NWA), describing the entity as all bark and no bite.

“The NWA is ineffective ... because they have not been putting any pressure on the Caribbean Cement Company. Those banks that you see there is just soft sand … . The river used to be way out. All the lands that you are looking at, the river is five times as wide as it is supposed to be,” the resident said.

The group complained that the situation was made worse after the passing of Tropical Storm Elsa in recent weeks, with silt piled up to three feet under the bridge, a far cry from the 21-foot clearance.

“The community is being ignored by both members of parliament (MPs). We not seeing them and we not hearing them. None of them a paying any attention to the situation,” one resident said.

Calls to both MPs – Juliet Holness for St Andrew East Rural and James Robertson for Western St Thomas – were not answered yesterday. Neither were they returned up to press time.