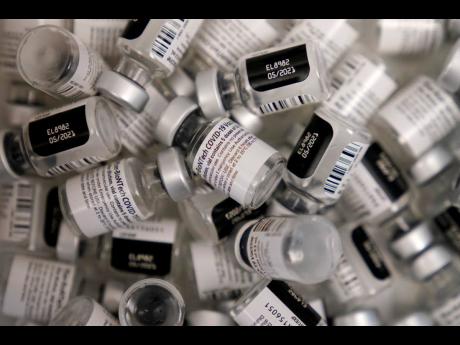 AP
In this January 22, 2021, file photo, used vials of the Pfizer-BioNTech COVID-19 vaccine lay empty at a vaccination center at the University of Nevada in Las Vegas. 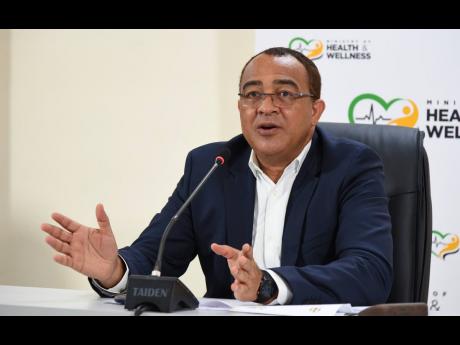 The country’s youth are to be given priority in accessing the Pfizer-BioNTech vaccine, which is being touted as one of the safest for use in children and adolescents, when 200,000 doses arrive in the island next week to boost the country’s vaccination drive.

Jamaicans 15 years and older will get first dibs on the jabs when the shipment lands here next Tuesday, August 17. Persons 12 years old and older with comorbidities will also be targeted with the two-dose vaccine.

The shots could begin to go into arms as early as August 23, Health and Wellness Minister Dr Christopher Tufton said during a briefing last evening. Tufton is hoping this latest development will benefit particularly students who are sitting exams.

“There is going to be some prioritisation and adjustment towards a younger population using that particular brand (Pfizer), and that’s because the research has been done, the clinical assessment has been done, and we go by what the science suggests or proves,” he noted, adding that the vaccine would be reserved for people with health challenges up to 50 years old.

The Pfizer-BioNTech vaccine is classified as an mRNA vaccine, which contain tiny fragments of the genetic material known as messenger ribonucleic acid.

In addition to the 300,000 AstraZeneca doses recently donated to Jamaica by the British government, more than 100,000 doses of the single-dose Johnson & Johnson jab are also slated to arrive on the island this month, a significant boost to the country’s stock of vaccines.

With this type of artillery in hand, the health minister expects to pitch not only vaccine pick-up for the island’s teachers, but also a large segment of the student population, using what he dubbed a double approach to enhance a fairly significant protection in the classroom.

Students throughout the country have suffered considerably as a result of the virus and the inability to access their classes.

However, there has been marked vaccine hesitancy among several of the island’s teachers, prompting Prime Minister Andrew Holness to threaten deincentivising certain educators. His suggestion was met with huge opposition from the Jamaica Teachers’ Association.

The country is experiencing a third wave of the COVID-19 pandemic, but a lack of equipment to conduct the relevant testing is hindering efforts to determine whether the Delta variant is in the island. It will take months to receive results.

As infection numbers grow exponentially, Chief Medical Officer Jacquiline Bisasor McKenzie described the situation as extremely dangerous, especially in terms of the threat to the care for COVID patients in the country’s under-pressure hospitals.

She revealed that the COVID-19 positivity rate was also dangerously high, with a concerning level of transmission currently occurring in the country.

In terms of geographical spread, Jamaica was now in a situation where 50 per cent or five per cent of communities are being affected with newly confirmed cases.

“We have jumped to where over 30 per cent as a very high transmission in country or reproductive rate remains at about 1.3, which means that as the numbers go up, more and more persons are being exposed, and becoming infected, and our vaccination rate is still at a low level that it would have no effect on the transmission,” Bisasor McKenzie said.