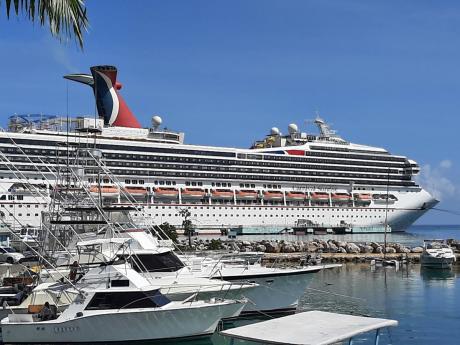 PHOTO BY CARL GILCHRIST
The Carnival Sunrise docked in Ocho Rios on Monday. 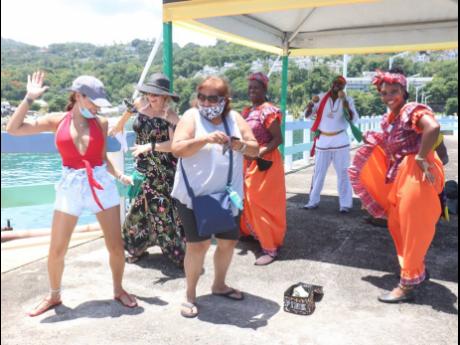 Ashley Anguin/Photographer
Some of the more than 3,000 passengers from the Carnival Sunrise cruise ship soak up the vibe from local entertainers at the Ocho Rios pier on Monday.
1
2

WESTERN BUREAU: By next winter season, which kicks off in October, Jamaica expects the return of Royal Caribbean Cruise Line, Disney and MSC to the country’s tourism roster. All three cruise lines will join Carnival, which officially reopened...

By next winter season, which kicks off in October, Jamaica expects the return of Royal Caribbean Cruise Line, Disney and MSC to the country’s tourism roster.

All three cruise lines will join Carnival, which officially reopened Jamaica’s cruise shipping business on Monday, when it docked its Sunrise ship at the Ocho Rios Pier with some 3,000 passengers, after a 17-month absence as a result of the COVID-19 pandemic.

Carnival, will make 16 cruise calls over the next 90 days, docking every five days in Ocho Rios. By the end of the year, with the return of the ships, Minister of Tourism Edmund Bartlett is forecasting that just under 300,000 passengers will visit the island’s shores.

Combined, cruise and stopover visitors should produce 1.7 million visitors for 2021, the minister told journalists during an interview at the Ocho Rios Pier. In fact, the tourism minister was on a high, having experienced two back-to-back milestones in the sector.

On Sunday, the country welcomed its one millionth stopover visitor at the Sangster International Airport, and hours later, the first ship in 17 months was calling on the former cruise ship capital, Ocho Rios.

“This signals the second critical phase of the reopening of the tourism industry. Today we begin with the first visitor from the cruise, so the process of building back has begun. We now need to bring back some 50,000 jobs into activity,” he stated.

Giving an insight into the programme outline, he noted that Carnival, is expected to make 16 calls in the next three months, while talks were being had with Royal Caribbean, Disney and MSC.

The island’s tourism capital, Montego Bay, is next on the list to receive a ship, followed by Falmouth in Trelawny.

“It has been a very strong and vigorous process of building out protocols of changing and making adjustments, trying to respond to variations of the virus itself and its mutation, and then to deal with attitude and mindset,” Bartlett said. “And all of these have complicated things quite a bit, so it has been an enormously strong and difficult process.”

As difficult as it has been, no one seemed happier than the Italy-born captain of Carnival Sunrise, Isidoro Renda, who spoke of the long relationship he has had with the island, and how excited he and his crew were to return.

The ship will visit Ocho Rios every five days at an average of three times per month before taking a break and returning the following month. The trips will originate out of Miami, Florida, Renda revealed.

Dishing out strict protocols – which extended to the various attractions, transportation operators and workers on the pier – the Jamaican in the mix representing Carnival International Corporation, Marie McKenzie, who is vice president of Global Ports and Caribbean Government Relations, said Jamaica had exceeded their expectations.

Jamaica is not the cruise line’s first port since returning to the ocean, and McKenzie said Jamaica was in line with so many of the requirements, and in some cases, had several things that the cruise company had already implemented through the instructions made by the Centers for Disease Control.