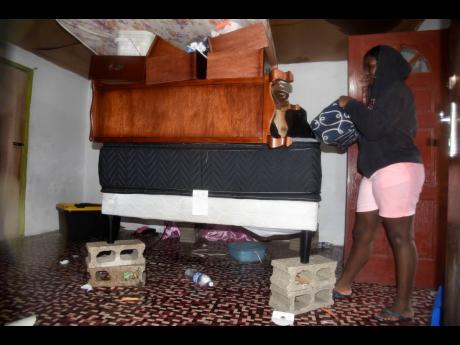 Nicholas Nunes/Photographer
Prized posessions are placed on concrete blocks in a home at Weise Road in Nine Miles, Bull Bay, on Tuesday. The household of Kerry-Ann Murray has still not recovered fully from the traumatic flooding of late 2020.

As Tropical Storm Grace’s whipping wind and rain pelted Shooters Hill and Weise Road in Bull Bay on Tuesday, residents shovelled way mounds of silt, wary of a replay of last year’s flooding nightmare at the back end of the hurricane season.

The storm, which skimmed the coastline of northeast Jamaica, resurrected memories of tragic landslides which claimed the lives of a father and his daughter in October 2020, with mud and debris.

Dwayne Reid was one of those who went to offer a helping hand.

He explained that removing some of the heavy stones and sand was necessary in order to prevent the water from settling and causing a ripple of woe.

A resident who only gave her name as Shantel expressed fear that the rainstorm would cause inescapable damage.

“How we suppose to survive? We cah survive!” she exclaimed while standing in the downpour and paving a path for water to flow away from her already-flooded board and zinc dwelling.

With four occupants in her home, most of them unemployed, Shantel pleaded for St Andrew East Rural Member of Parliament Juliet Holness to visit the neighbourhood and reach out to residents.

Meanwhile, Reid, who has lived in Shooters Hill for more than 40 years, said that he has gained much experience from battles with adverse weather.

“Generations tell me some things ... so we know how fi deal with it,” Reid told The Gleaner.

Eight houses precariously perched on a slope and prone to collapse were demolished by state authorities earlier this year. The open space that was once inhabited still serves as a chilling reminder of how quickly lives and livelihoods can change.

Despite the flood risk, residents declined to take refuge at the nearby emergency shelter at St Benedict’s Primary because of the threat of COVID-19.

Kerry Ann Murray, who was badly affected by Tropical Storms Zeta and Eta, which invoked the rage of the Chalky River to swamp homes with silt last year, is fearful of reliving that tragedy.

Though she hoisted bed frames and other furniture on to concrete blocks and barricaded her doors with sandbags, Murray considered seeking shelter on higher ground.

With back-to-school expenses looming, Murray remains uncertain about how she will cope with any further financial burden.

She told The Gleaner on Tuesday that she was short of funds to stock up on foodstuff if the rains persisted.

“Me nuh know. We bruk and nuhbody nah help we,” said Murray.