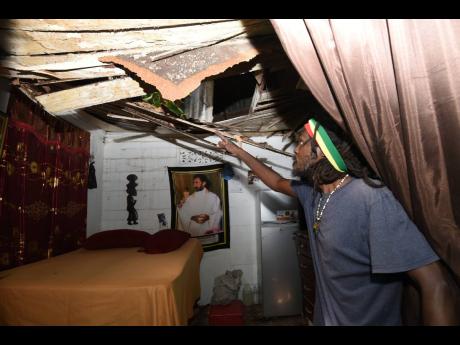 Kenyon Hemans/Photographer
Marlon Sutherland is happy to be alive after a mango tree fell on his house at 95 Mark Lane just after midnight Tuesday. The tree that stood for more than forty years snapped after a day of wind and rain generated by Tropical Storm Grace. 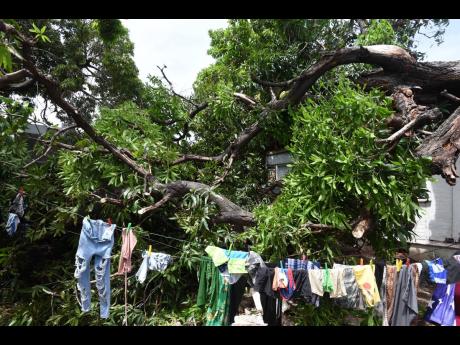 Kenyon Hemans/Photographer
This home on Mark Lane was destroyed by a mango tree that came crashing down. 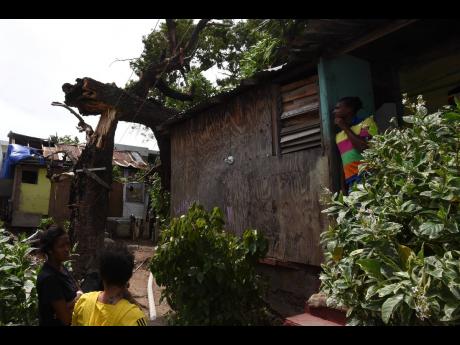 Kenyon Hemans/Photographer
Residents look on at the fallen tree that has displaced some residents of Mark Lane, Kingston.
1
2
3

Odaine Latchman still shudders as he replays in his mind how a more than 40-year-old fruit tree snapped, smashing the roof and bulldozing his zinc and board home early Wednesday morning.

The collapsed walls of the six-bedroom home at 95 Mark Lane in downtown Kingston were the telltale signs of the tail end of a day of torrential rain from Tropical Storm Grace, which scoured the island’s eastern parishes on Tuesday.

Latchman, who was inside the home with his girlfriend when the tragedy unfolded, told The Gleaner that he was awakened by a thunderous sound at one o’clock in the morning and discovered the tree inside the building. Residents believe that the wind-whipped tree finally gave way from the waterlogged soil.

“Me hear and just drag her off the bed,” Latchman said, explaining that he had to act swiftly in order to save his and his girlfriend’s lives.

The two had just returned home after the admission of their newborn baby at the Bustamante Hospital for children. They expressed relief that the infant was not there when the roof came crashing down.

Though no life was lost, the tree’s unwelcome visit destroyed furniture, beds, televisions, and other appliances.

Power lines torn down by the falling tree set off sparks, threatening to set the property on fire, said Camile Latchman.

Living in a neighbouring structure on the premises with two toddlers and her mother, she said that Tropical Storm Grace gusty winds ripped off zinc roofing.

The family was forced to find safety in a corner of the house as they watched the buckets of rainfall pouring in.

Ms Latchman’s mother, Bridget Stewart, was distressed as she pointed out the water-damaged items that were laid out in the sun to dry.

“We wet up, man. Come in like a outside we deh!” she exclaimed.

With nowhere else to live, homeowner Marlon Sutherland is appealing for assistance from state officials as he is already prepared to rebuild. Sutherland said that the first step towards recovery was getting assistance to remove the rubble and the tree.

Senior director of corporate services of the Office of Disaster Preparedness and Emergency Management (ODPEM), Richard Thompson, told The Gleaner on Wednesday that shelter arrangements and other welfare assistance would be made available to the Mark Lane residents.

Noting that no formal requests had been made for assistance from the ODPEM, Thompson urged affected persons to submit reports to municipal corporations, which would forward correspondence to the Ministry of Labour and Social Security. He said that that would reduce the risk of duplication of requests, which could hamper timely assistance.