Grace worse than we expected, say J’cans in Cayman 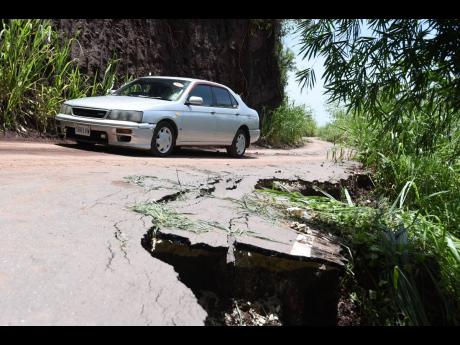 Kenyon Hemans/Photographer
A motorist travels on Wednesday along the recently constructed Savage Pen road, sections of which have begun to collapse after torrential rain generated by Tropical Storm Grace slammed eastern parishes a day earlier. Savage Pen is the alternative route to the Gordon Pen main road which sustained a massive breakaway from storm rains in 2020. Jamaicans in Grand Cayman say they were surprised by the strength of Tropical Storm Grace, which battered the island between 7 p.m. Tuesday and Wednesday afternoon.

WESTERN BUREAU: Jamaicans in Grand Cayman say they were surprised by the strength of Tropical Storm Grace, which battered the island between 7 p.m. Tuesday and Wednesday afternoon, disrupting electricity and Internet connection as it flooded...

Jamaicans in Grand Cayman say they were surprised by the strength of Tropical Storm Grace, which battered the island between 7 p.m. Tuesday and Wednesday afternoon, disrupting electricity and Internet connection as it flooded several roads and homes.

Many Jamaicans residing in an area called West Bay had to be evacuated by the Royal Cayman Islands Police Service.

“It was frightening because we weren’t looking for it. It surprised us. When I heard that a storm was coming, I couldn’t believe it,” Gloria Arscott, a Jamaican who has lived in Georgetown, Grand Cayman, for 19 years, told The Gleaner.

The storm hit the Cayman Islands on Tuesday night after wreaking havoc in Jamaica, and Arscott said that by 4 a.m. Wednesday, her home was without electricity and Internet service.

By 6 a.m., forceful winds had now joined the rains and accompanying thunder and lightning. Soon , trees began to fall as floodwaters rose.

Counting her blessings that the storm was not as devastating as 2004’s Hurricane Ivan, the 61-year-old housewife said she was following the government’s instruction to stay indoors, owing to the treacherous conditions of the roads.

She said that only two repatriation flights were affected – one scheduled for Miami, Florida, and the other for Norman Manley International in Kingston.

Overall, all services throughout the islands were shut down as a precaution, with only essential services operational.

“It was a worse storm than we expected. The high tide helped with a lot of flooding,” another Jamaican, who requested anonymity, told The Gleaner.

At 6 p.m., Wednesday, the National Emergency Operations Centre formally issued an all-clear for Grand Cayman, noting that although the islands were still experiencing bands of strong winds and torrential rain, the upgraded Hurricane Grace, was now moving west-northwest towards the Yucatán Peninsula at a speed of 16 miles per hour.

The organisation said that during the peak of the crisis, it responded to hundreds of calls from persons seeking an emergency service.

Work has already started clearing downed tree limbs and power lines to make roads passable. Meanwhile, crews from the Caribbean Utilities Company have begun the work of power restoration, a process that it said would continue overnight.

Acting Deputy Governor Gloria McField-Nixon explained that while 80 per cent of damage assessment had been completed on Grand Cayman, work would continue today.