Couple still over the moon 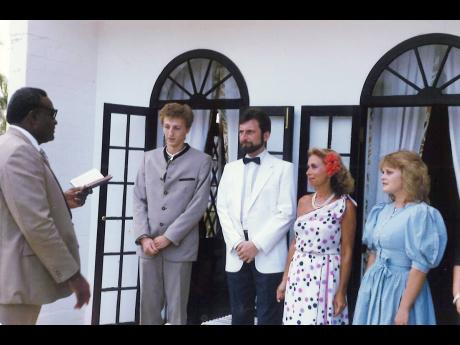 Contributed
The Rev Conrad Pitkin officiates at the wedding of Alfred Vlaschitz (centre) and wife Renate, alongside two witnesses, at their wedding ceremony 35 years ago at Half Moon in Montego Bay. 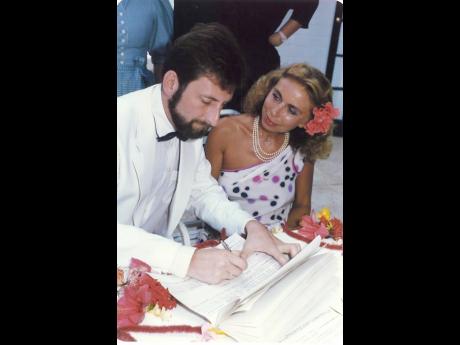 Contributed
Alfred Vlaschitz and his wife Renate at the Half Moon in Montego Bay on August 20, 1986. The couple celebrate their 35th anniversary today. 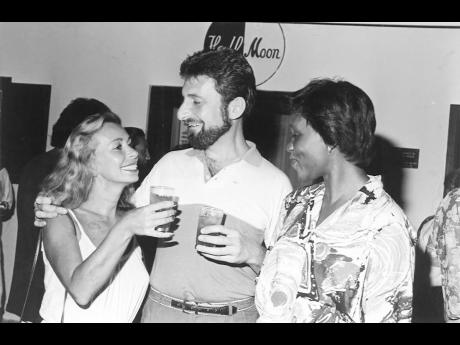 Weddings in Las Vegas or Monaco were popular in the mid-1980s, but this was also the era of James Bond, the waterfalls of Ocho Rios, and the music of Bob Marley, separating Jamaica from the pack.

Getting married in Jamaica was the hip thing to do for Alfred Vlaschitz, an Austrian who hopped on a British Airways plane carrying standby tickets with the woman who is now his wife, Renate.

The two tied the knot on August 20, thirty-five years ago, at Jamaica’s most exclusive resort, Half Moon in Montego Bay, after being captivated by an advert placed in an Austrian newspaper by the late Heinz Simonitsch.

“Half Moon was offering a special wedding package. All we had to do was turn up. They provided the marriage officer, the cake, the witnesses, and a reception,” Vlaschitz told The Gleaner from his home in Europe.

Travelling economy, Vlaschitz, then an airline sales representative, and his fiancée at the time, a stewardess, were bumped up to business class by airline personnel when they found out the couple were Montego Bay-bound.

“After arrival at the Half Moon hotel, everything was already arranged for a beautiful duplex bungalow, the pastor, best man, maid of honour, you name it.”

Coming from a cold country, Vlaschitz said the Jamaican weather was very hot, but being avid watersports lovers, he and Renate went for a dive, finding “golden Porsche sunglasses” and a money clip with US$220 on the ocean’s bed.

Their wedding was at high noon, and the pastor, the Rev Conrad Pitkin, now the custos of St James, arrived early and mistook the best man and the maid of honour for the wedding couple because they were in traditional garb.

“But after we intervened, he wed us! We had this nice wedding cake, which the best man made, we had this decorated terrace, we had nice music, but unfortunately, our folks were not with us,” Vlaschitz said.

Owing to the short trip, the couple had to store their wedding cake with lots of ice and freezing gadgets in order to take it home with them. The cake arrived in Austria unbroken, and the celebration continued with their family.

DEAR TO THEIR HEARTS

Despite promising themselves that they would return to the island every 10 years, they Vlaschitzes succeeded in achieving that feat only once in 35 years but said Jamaica would always be dear to their hearts.

“When we returned in 1996, we spent a few weeks there. We rented a car and saw everything of Jamaica, not only the tourist sort of things,” he said.

Vlaschitz made sure to point out that they never join tourist groups when on vacation.

During their visit, they dived, snorkelled, climbed Dunn’s River Falls and the Blue Mountains, went swimming in the Blue Lagoon, tasted Kingston and went to Firefly.

“We didn’t do any of the posh places for dinner. We rather join the locals,” he told The Gleaner.

One of the people who helped in arranging the wedding for the Austrian couple was Myrtle Dwyer, former director of sales and marketing at Half Moon. Dwyer had just returned from university in Germany and spoke the language fluently.

The Half Moon official said it was a period of evolution of the weddings market for Half Moon, and they started with weddings in order to diversify into other areas.

“We were such a romantic place, and one of the reasons we had great traction in the Austrian market was because we spoke the language. Our managing director was Austrian,” said Dwyer.

According to her, it was the in-thing that people would not bother with large weddings but just elope.

“We created packages for those who didn’t want a big crowd,” she said.

In those days, Half Moon was known for its large number of suites and lush gardens. The resort was home to junior, imperial, royal, and superior suites, and Simonitsch, an environmentalist, refused to cut down trees on the 400-acre property.

The hotel was known for its beautiful and elegant palm trees, and couples had several options of locations across the property. The Vlaschitzes had their wedding on the Oleander Terrace, which is now the Eclipse.