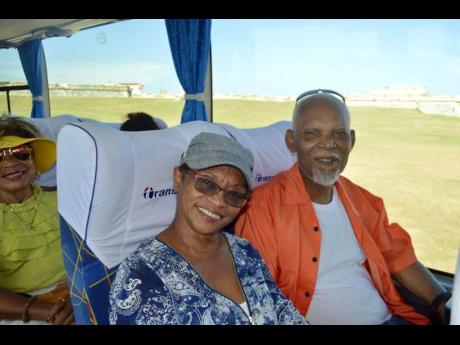 Pauline Knight, the esteemed public servant and wife of retired politician and veteran attorney-at-law K.D. Knight, died on Friday night, becoming one of more than 1,300 local victims of the deadly coronavirus.

As news of her passing spread, she was celebrated as a woman to whom “family was everything”.

Pauline Stone-Myrie, retired actress and public servant, said she first met her namesake, Pauline DoHarris (later Knight), in 1964 when they both got their first jobs at the Department of Statistics on Charles Street in Kingston.

“This is so devastating. K.D. is distraught. They have been married for more than 50 years and it is so tragic. Pauline was dedicated to her family. Although she had jobs that were very demanding and time consuming, her family was front and centre of her universe. She was a devoted mother, wife and grandmother,” Stone-Myrie told The Sunday Gleaner on Saturday.

She talked of a close friendship between the two at work and beyond.

“We used to have lunch together. She lived next door to K.D. in the early days and that's how their relationship started. He got a scholarship and went to Howard University and she went to Washington as well. That is where they got married. It's been a long union. And while I didn't see her every day, she was a friend, and was close friends with my sister-in-law who she met in Washington,” said Stone-Myrie.

The distressed friend added, “She was a wonderful human being who was beautiful and family oriented. Soft-spoken. Tragically, she lost her son some years ago and she was heartbroken, but she lived for KD, Stacey (her daughter) and the grandchildren. She has a long record of working with government for the betterment of her country. She was an example of someone who gave back to Jamaica.”

Stone-Myrie said the Knights' son, Kamal, died in 2007 after complications from pneumonia and leptospirosis.

Veteran attorney-at-law Bert Samuels, who shares practice with K.D. and John Junor, said the law family – Knight, Junor and Samuels – has been thrown into mourning.

“This is a massive loss. I knew her 40 years. A very humble, unassuming, quiet, homemaker, and after retirement took care of K.D. She was a great supporter of an active advocate. She had her grandchildren who were very close to her, two of them lived with her. A matriarch has gone,” said Samuels.

He added, “They have been married for 54 years, with a total of 57 years of friendship. They got married in their early 20s after meeting as teenagers. They went to England together where K.D. studied law at Gray's Inn and she did her master's at the University of London and came back to Jamaica with their firstborn Stacey, who is also an attorney.”

“She will be sadly missed and we are throwing all the support behind K.D. for this massive loss of his soulmate and wife,” Samuels said.

Pauline Knight, who held a doctorate in population studies and sustainable development, worked for many years as a director, and later director general (acting) of the PIOJ up to late 2010.

Since her death, sympathies and love have been pouring in for the family.

Former Cabinet Minister AJ Nicholson, who served for many years in the Senate with Knight, described Pauline as “a treasure”.

“The prayer from my family is that my colleague and Comrade of so many years will be granted strength beyond the ordinary in this time of great challenge. Dr Pauline Knight was a treasure,” Nicholson told The Sunday Gleaner.

“I got to know her while my husband and K.D. served in the Cabinet. She was an ardent Adventist but was very reserved. She took the death of Kamal very hard and suffered greatly from that loss,” Buchanan said.