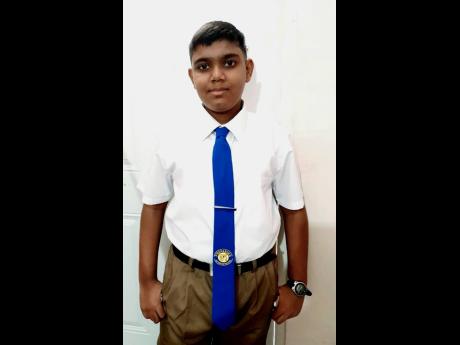 Eleven-year-old Veerendra Biragie has proven that burning the proverbial midnight oil has incredible rewards after being honoured as Jamaica’s top-performing boy in the recent sitting of the Primary Exit Profile (PEP) examination.

Veerendra, a graduate of the St James-based Hosanna Preparatory School, was awarded the five-year Guardian Life Scholarship in acknowledgement of his lofty achievement, which follows up on his previous attainment of the 2020 CHEETAH Scholarship for academic excellence in PEP.

“I feel happy for this achievement, but I also feel surprised because I did not expect to be the country’s top boy. I was excited and speechless when they first told me my result, and I also felt nervous,” Veerendra said of his initial reaction to his national placement.

“I spent a lot of late nights studying for the exam. It was difficult making preparations under this COVID-19 situation, but with help from my mum and dad and with my teachers’ help, I was able to do it,” added Veerendra, who will be attending Campion College in Kingston.

Sukhrani Biragie, Veerendra’s mother, highlighted her son’s practice of waking as early as 4 o’clock in the morning to study for the PEP exam.

“We would give him additional questions to work, on and we would try to discuss the questions with him and to get his view on the questions and see what he understood,” Biragie explained.

“When the result came out, we knew he was the school’s top boy, but on hearing he was also the island’s top boy, we were extremely elated and surprised at the same time.”

Shammy Dawkins, Hosanna Preparatory’s Grade Six teacher, described Veerendra, an aspiring astrophysicist, as quiet by nature and having an eye for detail.

Veerendra was one of three students from Hosanna Prep to get government scholarships following their high performance in this year’s PEP sitting.

The other two scholarship recipients were Jaivon Fuller and Giselle-Ann Swaby, the latter of whom was recently recognised as the 2021 CHEETAH Scholarship awardee in the Ministry of Education’s Region Four.

The three were among 11 students of Hosanna Preparatory who attained a 100 percentile rank in the PEP ability test component, with nine other students scoring in the 90-94 percentile range.

Chantelle Duhaney, Hosanna Prep’s systems administrator, congratulated the students for their exemplary performance, which she noted followed in the footsteps of past student and national Grade Six Achievement Test (GSAT) top boy in 2016, Jonathan Morgan.