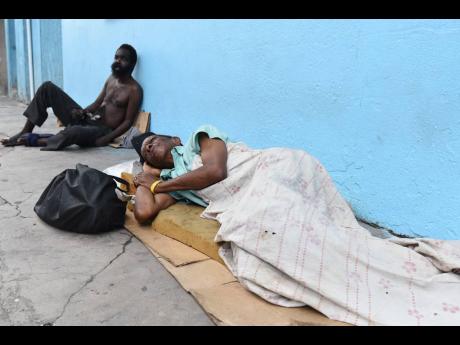 Kenyon Hemans/Photographer
A homeless man sleeps on the sidewalk along Church Street in Kingston on Tuesday, while another looks on. There are ongoing efforts to vaccinate homeless people across the island. 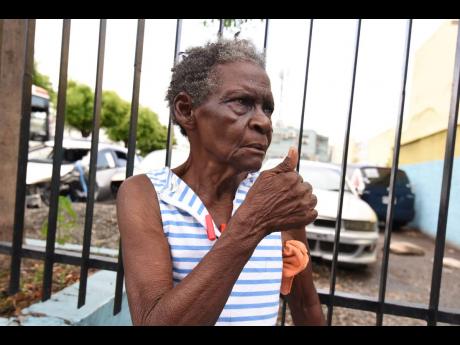 Kenyon Hemans/Photographer
Maria Bobb, who was left homeless after a 2017 fire in downtown Kingston, expressing her interest in taking the COVID-19 jab.
1
2

A homeless man on the streets of Kingston is advising the Government to mount an effective grass-roots campaign to educate the public on the possible side effects of the COVID-19 jabs and clear up concerns over the different brands to drive up vaccination rates.

The man, whom The Gleaner encountered across from the drop-in centre at the intersection of Barry and Church streets on Tuesday afternoon, said that the general feeling among the homeless was that the authorities’ efforts to address public apprehension were lacking in substance.

“People are unsure because even the commercials we hear on the radio about the need for people to be vaccinated so we can open up the country, people agree with that, but at the same time, we nah get enough information fi alleviate the fear weh the people have,” said the man, who decline to give his name or be photographed.

The antidote, he suggested, is to take that message into the streets.

“Somebody needs to come down here and tell us it is safe and what is in it and what might be the possible outcome or side effects if you take it. ... Nobody intelligent nah come down here come talk to we. Not even masks them nuh pass out,” he observed.

Two other street persons – Maria Bobb and Roger Chue – said they were willing to be vaccinated despite the negative things they had heard.

Bobb, who said that she was among 26 people left homeless after a December 2017 fire along East Street, is making arrangements to take the jab.

“I heard about the vaccine and the lady said I can speak to her Monday – a lady that passes through here some of the time,” the 40-odd-year-old woman told The Gleaner. “I am going to take it because maybe it can prevent the disease, and with so many things being carried in the air, any number can play.”

Chue, a former furniture worker who occupies a place on the piazza outside of the drop-in centre, admits to being influenced by an older friend.

“MI bredren say him take it – one 61-year-old elder man. Him take one [shot] already and him feel all right,” said Chue, who disclosed that he was kicked to the curb after falling out with a relative. “Most of the street people them a lick out pon it, say them nah take it because them say people get side effects out of it, but the Metro lady dem (municipal police) tell we say it good fi we ... .”

“I think it was a good exercise. It was the first, and we got probably 50 homeless persons who did, and then there were some members of the staff who did it,” Williams said, noting that some people needed more clarification before agreeing to take a shot

May Pen Mayor Winston Maragh said that Clarendon’s campaign to vaccinate the homeless was still on track although it had not begun.

“We haven’t done those yet. I’ll have to finalise it with the health department,” he explained.