Nearly half of nurses join sickout at CRH 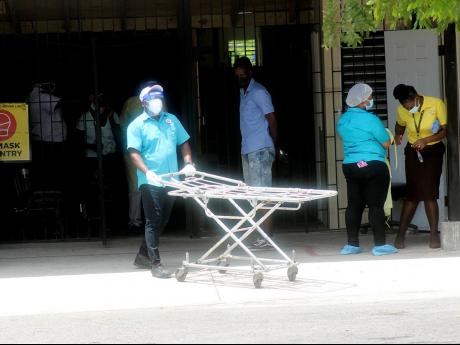 Accustomed to perennial poor service at the Cornwall Regional Hospital (CRH), many persons who showed up at the Montego Bay-based facility yesterday were initially unaware of a sickout among nurses, with almost half of the cohort not reporting for work.

The nurse’s absence coincided with that of other colleagues across the island, who complained about being unhappy with a recent statement by Prime Minister Andrew Holness that healthcare workers would not receive priority treatment if they fall ill on the job.

Additionally, the nurses complained of being overworked, fatigued, and undercompensated as they worked in overcapacity public-health facilities amid the COVID-19 pandemic.

The Gleaner was informed that only 50 out of 97 nurses slated to be on duty at the CRH yesterday showed up. The breakdown showed 12 specialist nurses out of 21; 30 registered nurses out of 59; two midwives out of eight; and six enrolled assistant nurses out of nine.

When our news team visited the Mount Salem-based hospital yesterday, the nurses, doctors, and patient-care assistants seen were not willing to speak on the matter.

Efforts to get a comment from hospital CEO Charmaine Williams-Beckford also proved futile.

However, a security guard at the hospital said he fully understood the plight of the nurses.

“Most of the nurses are burnt out, especially the ones who work at A&E (accident and emergency) or on Block C and Block F, where you have persons with COVID and asthma ... . It is really rough on them,” he said.

Patients and their relatives were peeved when apprised of the sickout.

A woman, who identified herself only as Miriam, said she had brought her brother in for treatment early yesterday morning and she was repeatedly being told to wait for an update on his condition.

“I called my brother [via telephone] because we cannot get close to him, and he said he has been in the hallway of the ward ever since we brought him here from about 7 a.m.,” said the frustrated woman. “It is lousy here ... . This is the worst hospital I have ever seen. If they pay more money, the staff will probably be more attentive to the people.”

Another woman, who gave her name as Ann, also complained of the seeming lack of attention to her mother.

“My mother is still here where we left her [on Tuesday], and it is frustrating because we have been waiting and cannot get any answers,” she said.

St Andrade Sinclair, the regional director of the Western Regional Health Authority, said he would not be able to comment on how the nurses’ absence affected hospitals across the region until he got official reports from all the hospitals’ CEOs.