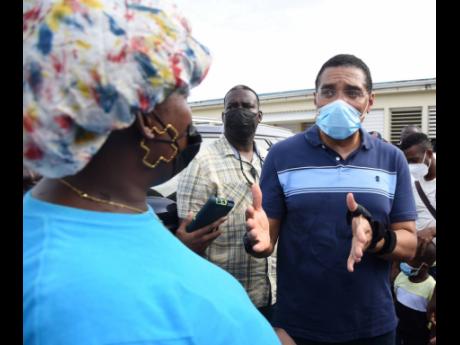 Ian Allen/Photographer
Prime Minister Andrew Holness listens to the complaints of a woman at the Isaac Barrant Health Centre in St Thomas as he toured the facility on Wednesday. 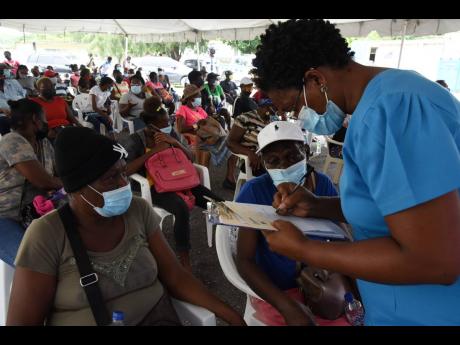 Fear of insurrection from the public may have been the catalyst behind the Andrew Holness administration's decision to reopen various sectors of the country, exposing it to an unprecedented spike in COVID-19 infections.

Wednesday's revelation during a tour of St Thomas – one of the two most vaccine-resistant parishes in Jamaica – was the first time the prime minister, or any Cabinet member, has come close to accepting culpability for a tsunami of coronavirus cases, with death and hospitalisation records tumbling throughout August.

While mounting a defence of his management of the pandemic, Holness conceded that his Government could have taken tougher, unpopular decisions – a contrition of sorts that contrasts with the blunt pushback from colleague ministers Olivia Grange and Desmond McKenzie.

“I'm human. I'm not infallible. Errors can be made, and I'm certain that upon reflection, there are things that could have been done differently.

“I find that there are a lot of finger-pointing … people looking to blame … but I'm focusing on the job,” said the prime minister, accusing his detractors of having short memories.

Casting some blame on lobbyists who agitated for the loosening of restrictions on industries, he said that the Government was responsive to that hue and cry.

Holness told reporters that the Government was clear in its warning that the reopening of sectors, among them the events and entertainment industry mothballed since March 2020, would have resulted in a rise in COVID numbers.

However, he shared that ignoring the calls could have resulted in unrest.

The July 1 reopening of the entertainment industry has come under fire for the third wave, which has caused deaths to mount to 1,549, with infections nearing 68,500. A record daily report of 31 deaths, spanning August 23-30, was issued on Wednesday.

Meanwhile, the oxygen and bed space crisis at hospitals has worsened.

Criticism of the Government's green light for parties appears to be moot, with senior health officials confirming that the roots of the COVID-19 spike traced back to July.

The prime minister, who led a sensitisation tour of St Thomas on Wednesday, also interacted with persons who turned up at the Centre of Excellence Isaac Barrant Health Centre in Hampton Court, one of two vaccination blitz sites in the parish.

He revealed that the tour was a kick-starter for the Government's latest initiative to drive mass inoculation among the population.

According to the health ministry's online tracker, 542,888 persons have received at least one dose, with 144,000 fully vaccinated. The country is targeting 65 per cent herd immunity by March 2022.

Holness also launched, on Wednesday, the much-touted community vaccination drive designed to mobilise grass-roots leaders and elected representatives to flood villages and districts with influencers “to get people to come out and take the vaccine”.