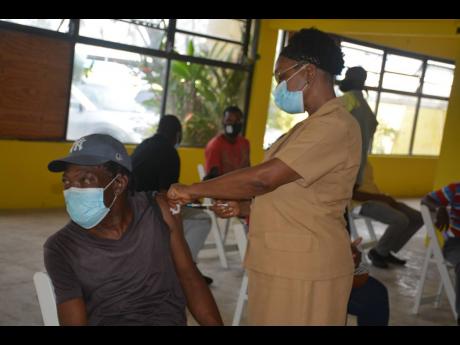 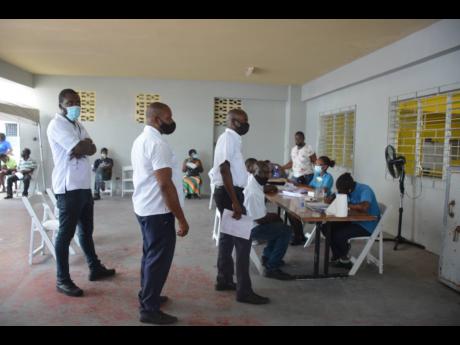 Photo by Janet Silvera
Bus drivers from Tropical Tours and Jamaica Tours wait their turn as they register for vaccinate at a blitz site on Wednesday.
1
2

Bus driver Andrew Grizzle interacts with no fewer than 150 visitors to the island monthly, and still, he never feared the coronavirus until Westmoreland nurse Diagrea Cunningham’s life succumbed to the deadly disease.

For months he had been reluctant to take the vaccine, but Cunningham’s death, and what Grizzle describes as the “destruction of the hospital system”, have convinced him and his firefighter wife to both take the jab.

Cunningham, a former accident and emergency supervisor, died at Cornwall Regional Hospital on Monday after contracting the virus. There have been conflicting accounts of whether she starved for oxygen owing to a shortage.

“She has helped so many people fighting COVID ... and actually died from it ... . That is why I am here,” Grizzle, who is employed to Tropical Tours, told The Gleaner Wednesday afternoon in Montego Bay.

Grizzle is among 170,000 tourism workers that the Ministry of Tourism is targeting in its vaccine blitz, which kicked off on Monday at The Jamaica Pegasus in Kingston.

Tropical Tours’ Fred Smith was among several private-sector business leaders behind the staging of the initiative.

According to him, 250 persons, many of them drivers from companies such as Jamaica Tours and Kuoni, and even international representatives such as TUI, and AMSTAR Destination Management, had their staff at the islandwide vaccine campaign.

“Without tourism, this country nuh move. Me mix up with good, bad, and the indifferent, so me had to come tek the vaccine,” Ryan Richards, estate manager at Lethe Estate, told The Gleaner.

Air-condition technician Delroy Wisdom said he was jolted into action after learning of the soaring deaths, well above 1,500, reported on television.

Vaccines will be at the core of Jamaica’s travel industry’s sustainability, Tourism Minister Edmund Bartlett has said.

While stressing that vaccination was not mandatory, Bartlett said that the targeted groups include workers in hotels, villas, guest houses, attractions, airports, cruise ports, craft markets, as well as ground-transportation operators.

But it is evident that tourism may be in a race against time as cruise ship operators have reported reservations about their passengers interacting with unvaccinated tourism workers. Cruises were among the first industries to collapse in the early months of the pandemic, anchoring vessels and sinking revenues.

Meanwhile, all eyes today are on Sandals Negril, where the ‘Vax Day’ campaign continues, before moving to Moon Palace Ocho Rios on Friday, September 3.

The initiative comes at a pivotal time in the sector’s history as the third wave of the pandemic has caused some jitters, with some hotels and villas already seeing cancellations and a reduction in the pace of bookings for the months of September and October.

“It is our hope that with the upscaling of the vaccination programme and stricter observance of health and safety protocols islandwide, we can stabilise the market in time for a rebound of the 2021-2022 winter season,” president of the Jamaica Hotel and Tourist Association (JHTA), Clifton Reader, told The Gleaner last week.

The latest effort to bolster vaccination in the tourism sector is being led by the newly named Tourism Vaccination Task Force, supported by the Ministry of Health and Wellness, the Ministry of Local Government and Community Development, the Private Sector Organisation of Jamaica, and tourism stakeholders.