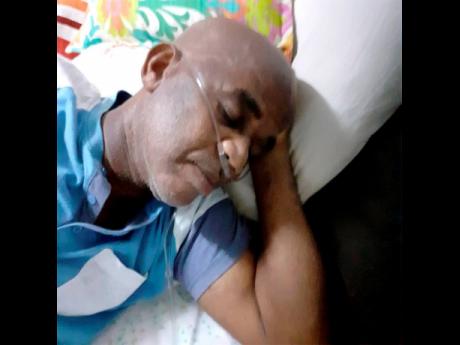 Contributed
Earldon Nichols, 65, discovered that he had diabetes during his battle with COVID-19. 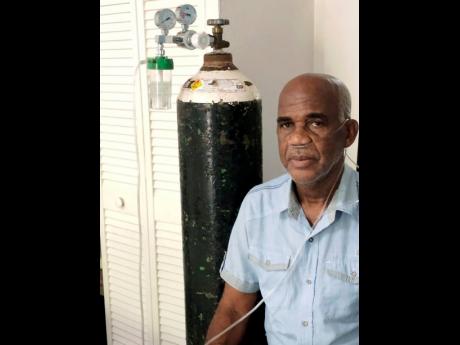 Contributed
Earldon Nichols seen here hooked up to an oxygen tank. “I am just grateful I was able to recover although I have this (diabetes) to deal with now,” he said.
1
2

The death of a 19-year-old woman from Porus, Manchester, has sent her family into a tunnel of grief that seems to have no end in sight after she was diagnosed with diabetes upon contracting COVID-19. Health restrictions stripped the woman, who...

The death of a 19-year-old woman from Porus, Manchester, has sent her family into a tunnel of grief that seems to have no end in sight after she was diagnosed with diabetes upon contracting COVID-19.

Health restrictions stripped the woman, who will not be named, of the usual bedside visits that would come with hospital admissions when she spent 11 days at Mandeville Regional Hospital (MRH) in Manchester.

She died from COVID-19-related complications on August 17, causing endless agony for her family, a relative told The Gleaner on Wednesday. Her mother arrived in the island a day after she died.

The young woman, who was a student of Knox Community College, is said to have developed flu-like symptoms along with other family members in early August, but after finding it “extremely” difficult to breathe and vomiting violently, she was rushed to hospital.

The relative, who asked not to be named, shared that the COVID-19 victim suffered before succumbing to her illness. Doctors had indicated to family members that her lungs and kidneys were “badly damaged” and that she was not responding to treatment.

“The day before she died, they said she developed heart complications. She was known to be asthmatic, but upon admission to MRH, it was discovered that she was diabetic,” the relative said.

Her death brings into sharp focus the brewing crisis of non-communicable diseases (NCDs) and the likelihood that it may be more prevalent and worrying for healthcare professionals.

NCDs are the leading cause of death in Jamaica, accounting for 79 per cent of all deaths, the Ministry of Health and Wellness has said. Combined with COVID-19, it presents a toxic cocktail of diseases or disorders that makes victims of the virus more prone to severe illness or death.

Earldon Nichols spent 26 days in hospital in June after the final of three COVID-19 tests confirmed that he was a carrier of the virus.

He, too, was diagnosed with diabetes during his time at the University Hospital of the West Indies. He was asymptomatic.

“Eventually, I wasn’t feeling well. I never had any appetite and was feeling drowsy all the time. My wife took me to Andrews [Hospital] and then to University. They did some tests and realised that my oxygen was low, and that’s when I was admitted. After that they did some tests and told me that I have Type Two diabetes,” Nichols, 65, told The Gleaner.

He said that although he was surprised by the diagnosis, he was not overwhelmed with fear. His immediate thought was to get past the virus and then focus on the NCD and the more than $400,000 bill he had racked up.

“I am just grateful I was able to recover although I have this (diabetes) to deal with now. But I just give thanks I didn’t go (die),” the Trelawny resident said.

In June 2020, Health Minister Dr Christopher Tufton disclosed that half of the Jamaican workforce, aged 20 to 64, have at least one NCD, such as diabetes or heart disease, with approximately 40-50 per cent of people with an NCD being completely unaware that they have one.

In a Gleaner interview on Wednesday, Dr Naydene Williams, director of health services, planning, and integration in the Ministry of Health and Wellness, noted that COVID-19 has been unmasking NCDs since the virus was first detected in the country in March 2020.

Williams also said that a person could be “perfectly fine” and later develop complications from COVID-19. Inflammation could have knock-on effects on organs, triggering illnesses such as diabetes.