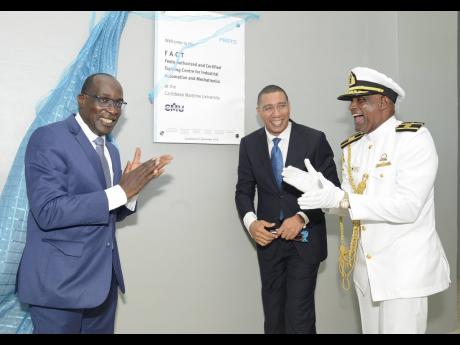 File
Prime Minister Andrew Holness (centre) is seen here with Ruel Reid and Professor Fritz Pinnock at a September 2018 dedication ceremony at the Caribbean Maritime University. Reid and Pinnock are still earning millions annually while on leave because of a corruption scandal.

Taxpayers are still financing multimillion-dollar salaries for the scandal-scarred Ruel Reid and Fritz Pinnock, the putative heads of Jamaica College (JC) and Caribbean Maritime University (CMU), respectively, who have gone on leave since 2019....

Taxpayers are still financing multimillion-dollar salaries for the scandal-scarred Ruel Reid and Fritz Pinnock, the putative heads of Jamaica College (JC) and Caribbean Maritime University (CMU), respectively, who have gone on leave since 2019.

Reid, a one-time confidant of Prime Minister Andrew Holness, is still being paid as principal at JC – the all-boys’ high school located at 189 Old Hope Road.

Pinnock also received a salary from CMU up to the end of August. Both have been paid more than $11 million annually since they were criminally charged in 2019.

The same taxpayers are funding the paycheque for Wayne Robinson, who has been acting principal since 2016, when Reid was seconded as minister of education, youth and information.

After Reid quit as pressure from investigators grew, Holness took charge of the portfolio and, effectively, gave approval for the special-leave applications.

The Fayval Williams-headed education ministry, the final arbiter in matters relating to schools in Jamaica, has deferred answering questions submitted by The Gleaner on August 24.

Those lines of inquiry included the terms of the special leave granted to Reid after he was dismissed and later charged. The Gleaner also sought to ascertain whether the leave was ad infinitum or whether it came to an end and was renewed.

The Ministry of Education, through its information arm, said: “CMU has a council and JC has a board. You should try to get the information from them.”

Special-leave provisions are covered in the Education Regulations, Section 68, which says, inter alia, that “a teacher in a public education institution may be allowed special leave with or without pay as the minister may approve on the recommendation of the board to enable the teacher …” to undertake a number of activities.

A lawyer with knowledge of the situation accused the JC board of aiding and abetting the Government in the saga.

“Since the JC board, also appointed by the minister, refused to invoke disciplinary proceedings to suspend or remove him from office, he remains paid staff. Noteworthy, too, even if convicted, he could still remain principal given that the Education Regulations don’t speak to automatic dismissal, even after a conviction,” said the lawyer.

Michael Bernard, chairman of the JC board, said that the school and its old boys’ association ceased making payments to Reid in 2016. Lodging benefits at JC were also withdrawn.

“Let me make it abundantly clear: From the day Ruel Reid left Jamaica College to serve the Government as minister of education, the school has not paid him a dime.

“... He was granted leave for two periods. The first was for the secondment, and then when he was terminated from the ministry, he applied for and was granted special leave for two years to allow for all this matter to be resolved. That two-year [period] will end in November this year,” Bernard told The Gleaner.

It is not clear if the sum being paid is full or part salary.

Bernard said the school board received advice from their lawyer to not interfere in the legal process.

“So if he is still getting a salary, it may be that all teachers employed as permanent staff at JC are paid by the ministry. So the ministry would send the money to the school, and we make the payments,” the board chairman said.

“So if your evidence suggests that JC is paying him, the school is only a conduit,” he said, reiterating that Reid is still on board- and ministry-approved leave until November.

Pinnock collects $564,000 monthly, a sum equivalent to 75 per cent of his salary, The Gleaner understands.

The professor’s leave was approved by the CMU Council, but the tenure of the contract is unclear.

The Supreme Court granted Pinnock’s and Reid’s application for judicial review in their bid to quash the ruling of Senior Parish Judge Chester Crooks that they stand trial for fraud.

Attorney-at-law Hugh Wildman has suggested that the Financial Investigations Division did not have the authority in law to arrest or charge the men.