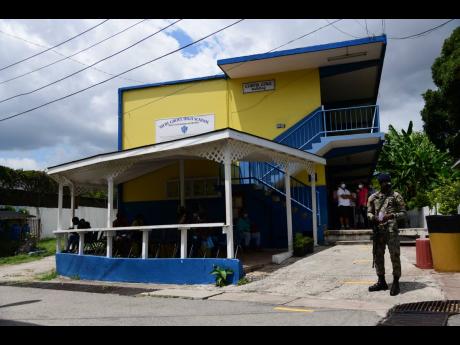 Gladstone Taylor/Multimedia Photo Editor
A soldier stands guard near the Curtis Cole Building at Merl Grove High School in St Andrew during a vaccination blitz on Sunday. The school’s administration has been thrown into turmoil after principal Dr Marjorie Fullerton was suspended by the board. 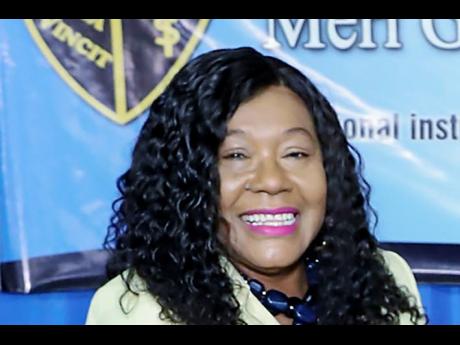 Despite a whirlwind controversy bedevilling Merl Grove High School in Kingston, board Chairman David Hall has defended the decision to suspend principal Dr Marjorie Fullerton and insisted that everything is being done to ensure that the students are not affected as the second week of the new academic year gets under way.

“As chairman, I have taken the higher ground. I cannot afford to put the school in any further doldrums.”

Efforts to reach Fullerton on Sunday were unsuccessful as her phone went to voicemail.

But Simone Thomas, president of the Canadian chapter of the past students' association, is livid about what she claims is the unfair treatment that has been meted out to an outstanding educator.

The board of Merl Grove High suspended the principal at a meeting last Thursday for reportedly going off on break for three weeks without discussing plans with her subordinates for the reopening of school in September.

The Gleaner understands that the decision to suspend the educator was made under Section 60 of the Education Regulations of 1980, which states that a teacher in a public educational institution against whom the board intends to take disciplinary action may be suspended from duty by the board of the institution until the matter is determined.

Thomas said that the principal sent an email to all concerned parties, including the education ministry.

“They were notified that she would be out of office from August 16 to September 3 and resume duties on September 6,” said Thomas.

The presidents of the Canadian, New York, and Jamaican chapters of the past students' association are pushing an online petition calling for the immediate reinstatement of the principal with an apology.

Up to news time on Sunday evening more than 700 people had signed the petition.

The groups are also “exercising a no-confidence vote in Mr David Hall, chairman of the board of management”.

The past students' associations are also pushing for all appointments and terminations that occurred during the absence and without any consultation with the principal to be rescinded. Other persons who had allegedly been demoted or lost their positions owing to the Merl Grove debacle are vice-principal for upper school, Michael Dryden; senior teachers Janiel Rowe, Tamara Dyer-Henry, Keino Johnson, Auld-Joseph, and the facilities manager Ian Robinson.

The shake-up has reportedly been done by acting vice-principal Lorretta Ricketts, who is said to be at odds with the principal.

Calls to her phone on Sunday went unanswered.

“So there is no procedural fairness or natural justice to come out of it,” said Thomas.

“Mr Hall just works like a testosterone-energised bunny, and I am sorry, you don't do that to people. You can't let your ego cause you to disrespect someone who has earned her place.”

The past students associations' leadership claims that the academic performance of the school under Fullerton has improved.

“Tell me that the principal has done you wrong, Mr Hall,” Thomas challenged the chairman.

However, the chairman has rubbished claims that he has been involved in the day-to-day operations of the institution.

He told The Gleaner on Sunday that he was appointed chairman by the minister of education and took over the chairmanship of the school in April.

Hall said the board has had several meetings where issues that spilled over from before his time have been discussed.

“Very serious issues that we have tried to address,” said Hall, who described himself as a stickler for good governance.

“The only time that I had any interactions with the school was the three weeks that the principal went off,” he added.

He said the actions taken by the board were fully aligned with the Ministry of Education guidelines of 1980.

Hall dismissed claims that the members of the board who were selected by the Associated Gospel Assemblies, the church that runs the institution, closed ranks to suspend the principal.

He said there was a mix of representatives on the board, including seven from the church, five from the school, and four from other organisations.

The vote to suspend the principal comprised 10 for, four against, one abstention, and one absent, said Hall.

But Thomas rejected the claims by Hall, charging that members of the board went to the meeting last Thursday prepared with a “typed” motion to suspend the principal.

“So the meeting was a sham. It was a waste of people's time to come in thinking that they are voting and having a discussion on something when it was actually a premeditated vote to remove her from office by way of suspension,” she said.

Fullerton has been accused of being “openly disrespectful towards academic staff. We have witnessed countless instances in which she outrightly and tactlessly disrespected vice-principals Ricketts and Hunter in the presence of both senior and junior teachers”.

The group of teachers also claimed that those who disagreed with Fullerton were publicly berated, stripped of positions, or reshuffled.