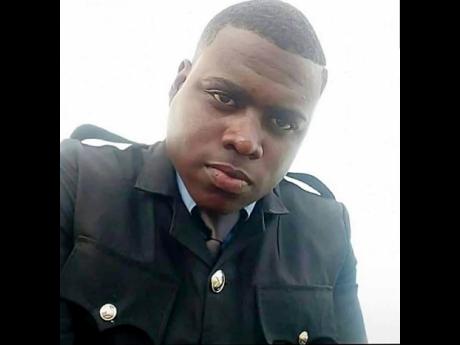 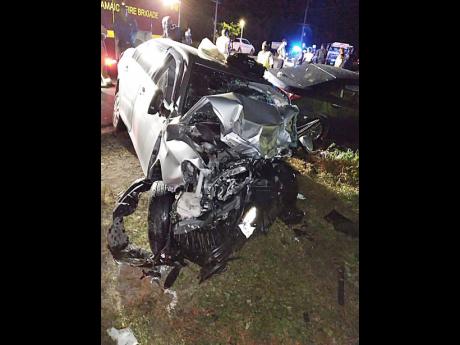 Contributed
The mangled wreck of the Toyota Axio motor car in which Stefan Walters and Alex Williams were travelling Monday night.
1
2

Last week Monday when firemen from the Ocho Rios Fire Station responded to an emergency in Moneague, they grappled with the deaths of two men from noxious fumes from a septic tank. Another died the following morning.

A week later, the same station is mourning as they confronted another tragedy as two of their own perished in a motor vehicle crash along the Laughlands main road on Monday night.

Alex Williams, who celebrated his 22nd birthday a week ago, and Stefan Walters, 25, might not have been part of that rescue team in Moneague but were excellent team players and dedicated workers, their colleagues have said.

“It is a tragedy for the division; it is a great loss,” said Julian Davis-Buckle, assistant commissioner in charge of Area Two of the Jamaica Fire Brigade, consisting of Trelawny, St Ann, St James, and Portland.

The men had driven a colleague home to Runaway Bay after the 10 p.m. shift finished and were on their way back when the Toyota Axio in which they were travelling crashed into a Toyota Altis in the vicinity of the road leading to Chester.

They were pronounced dead at hospital.

The driver of the other vehicle, who was travelling alone, remains in critical condition.

Firefighter Donald Gardner said Walters was always a jovial person and would always wait on his colleagues and drive them home at nights.

“They can call him and him carry them home anytime. A so him stay,” Gardner said, with Lance Corporal Gifton Rose confirming the sentiment.

But they said Walters sold his car just about a week ago and was without a ride, as he was seeking to buy another. So his good friend, Williams, took up the slack dropping colleagues home after work.

Meanwhile, Davis-Buckle, while hailing the young firefighters, said that the healing process has already started.

Already, former colleagues and family members of the deceased have been offered grief counselling.

“These were two young, promising firefighters with a lot of initiative,” Davis-Buckle stated.

“It is a tragedy for the division.”