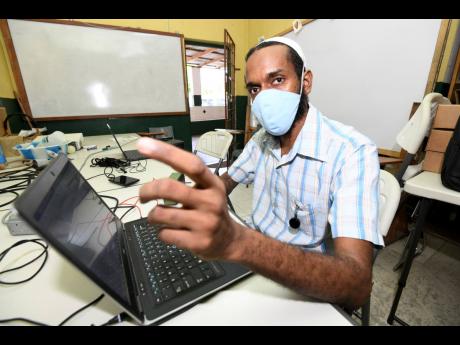 Rudolph Brown/Photographer
Taariq Abdul-Majeed, spokesman at the Islamic Council of Jamaica, makes a point during a visit to the Masjid Arrahman in Spanish Town on Monday.

Every time Taariq Abdul-Majeed enters an airport, he is seized with dread that his name will boom from a loudspeaker or that he will beckoned by the daunting index finger of a security official to step out of the line.

It’s happened in Dubai. In Saudia Arabia. In Kingston.

“They’re two occasions that I have travelled not hearing my name, and it was very surprising,” Abdul-Majeed, public relations officer and media liaison for the Islamic Council of Jamaica, said.

Twenty years after the 9/11 terrorist attack in the United States, some Muslims living in Jamaica say they are still haunted by Islamophobia, primarily when they travel overseas.

Almost three thousand people were killed in September 2001 by al-Qaida terrorists, whose pilots transformed passenger airlines into missiles that slammed into the World Trade Center, causing the twin towers to collapse.

Citing the stigma as real and pervasive, the Islamic Council spokesman said that Muslims are heavily profiled by immigration and security officials.

“Even local immigration, whether returning home or leaving, many times we are basically pulled from the line, asked certain questions, so we do face that travelling,” Abdul-Majeed told The Gleaner during an interview at Masjid Arrahman Islamic Council in St Catherine on Monday.

The airport trauma that Muslims face here and abroad is worlds away from daily life in Jamaica, Abdul-Majeed stressed. They feel quite at home, he said.

Besides employment woes faced by Islamic women – owing to the idiosyncrasies of dress code that are sometimes viewed as culturally unsuitable in some workplaces – Jamaican Muslims do not face high levels of scepticism here, he said.

Homecomings are sentimental experiences for travellers, but they haven’t always been so for Abdul-Majeed.

“Even when I arrived home, I was cordoned by immigration, even though I had the [Jamaican] passport. I was asked several questions for almost over an hour, and the questions were about terrorism and lots of different acts,” said the spokesman.

“I found it very strange, because all my history is here. Even at home, you are suspected without basis, without reason. Many times, just the name alone creates stigma.”

Abdul-Majeed, who has travelled to Guyana, Trinidad, The Bahamas, and the Middle East, has also been repeatedly grilled about the contents of his luggage and almost missed flights because of security delays.

One source of near embarrassment happened when he was returning to Jamaica from Guyana, having just married his spouse in 2006 – five years after 9/11.

“They called me, and everyone else they told them to go, so I was called out to ask what’s in the bags, to empty the suitcase ... and it was at that extent that I saw them moving the stairs away for the flight and I asked how am I going to get home, and they called the pilot and held the flight,” Abdul-Majeed told The Gleaner.

Members of the Muslim community have also been flagged because of their names bore similarities to blacklisted suspects.

“They have been held in Trinidad. They have been held in Guyana, and again on suspicion because their names are similar to names of persons who have committed certain acts, from possibly in the Middle East and the United States, even though they are born here and grown here with a passport.

“... It causes red flags, and they are held for days to investigate,” Abdul-Majeed said.