‘Man A Yaad’ back in charge 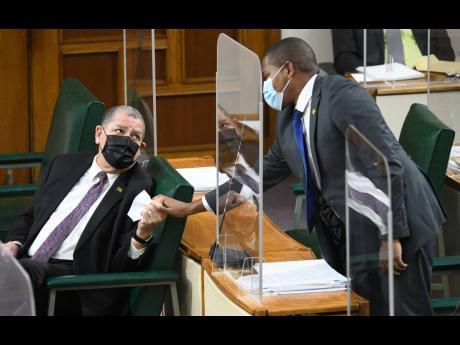 Rudolph Brown/Photographer
Audley Shaw greets Floyd Green on his arrival at the sitting of Parliament yesterday at Gordon House in Kingston. Shaw will assume the agriculture and fisheries portfolio following Green’s resignation as minister yesterday.

The announcement that Audley Shaw, the self-styled ‘Man A Yaad’, has been handed the reins of the Ministry of Agriculture and Fisheries again in the wake of yesterday’s resignation by Floyd Green, is being hailed as a strategic move by experts in the agriculture sector.

Green stepped down yesterday amid public outrage after a video emerged showing him among a group of people at a birthday party on Tuesday, a coronavirus no-movement day.

Jamaica House announced last evening that Shaw, who has portfolio responsibility for industry and commerce, would also be assuming the agriculture and fisheries portfolio. It did not say whether the appointment was temporary.

Agriculturalist, journalist, and publisher Patrick Maitland hailed the assignment as a good move given Shaw’s previous experience as head of the former super Ministry of Industry, Investment, Commerce, Agriculture and Fisheries.

“I am sure he will hit the ground running right now. He is also very familiar with most of the development strategies being implemented, which should allow for smooth continuity,” Maitland told The Gleaner.

Jamaica Agricultural Society President Lenworth Fulton said that putting the agriculture portfolio back into the hands of a seasoned campaigner makes sense as it would mean a longer learning curve for a newcomer at a time when agriculture desperately needs proactive, decisive leadership.

“He did well when he was there because he is approachable and seeks the approval of the technocrats on issues of importance. For this reason, we did not have any problems with him at all because just like Minister Green, you could call him, and he would always respond, or text him, and he would be sure to answer. He is not the type who has a phone and doesn’t answer it,” said Fulton.

Ironically, it was this tendency that got Shaw into a spot of bother in 2017 when as minister of finance, he racked up a whopping telephone bill of $8.3 million in a year, due largely to roaming charges.

Maitland believes that first-term member of parliament Parliament Juliet Holness has the requisite enthusiasm to be considered for the job as Jamaica’s first female agriculture minister.

“With her obvious passion for agriculture, she should be considered, given her attitude and passion, and I think that if given a ministry, she would leave no stone unturned in ensuring that everything is done properly,” he said.

Holness, who is the wife of the prime minister, has brought new life to her St Andrew West Rural constituency and has engaged her constituents in cutting-edge agricultural technology, with strawberries among the crops in which they have invested.