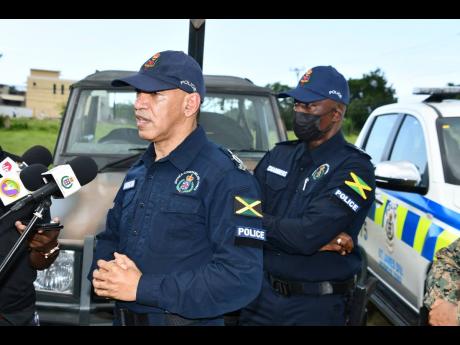 File
Antony Anderson, the commissioner of police, says the justice system is often too soft on gun crimes.

Jermaine Chamberlain was charged by the police on September 21 last year for using an illegal gun to rob a young woman in east Kingston.

But 10 months later, after pleading guilty to aggravated robbery in the Kingston and St Andrew Parish Court, Chamberlain is back on the street after his nine-month prison sentence was suspended by a judge for two years.

Leighton Johnson was charged by the police in Trelawny for illegal possession of firearm and ammunition.

Twenty-five days later, Johnson was a free man after he was sentenced by a judge in the Western Regional Gun Court to a fine of $100,000 for illegal possession of firearm. He was admonished and discharged for the ammunition charge.

Both cases are among 16 compiled by the police as they again call public attention to perceived slap-on-the-wrist sentences being imposed by the courts for gun-related offences, which they believe embolden criminals.

All the cases were disposed of this year.

“Young men are choosing to walk up and down with guns because they know that if we catch them with the gun, they are gonna face a fine or such a short sentence that by the time you look around, they are back on the road,” a strident Police Commissioner Major General Antony Anderson declared on Wednesday.

Jamaica recorded 991 murders – 843 involving the use of a gun – between January 1 and September 11, a 10 per cent increase year-on-year, according to the latest statistics released by the police.

Twenty-four of those murders - 92 per cent of which involved the use of a gun - occurred last week, the commissioner disclosed.

“I’m saying it is not adequate when I review 16 cases … and in none of those cases of illegal possession were the persons required to go to jail. None. It’s either a fine or a suspended sentence or probation,” said Anderson.

He cited, too, the cases of three women in Westmoreland and St Elizabeth who were the victims of robbery and unlawful wounding involving a gun.

According to the police chief, a day after the perpetrators were convicted, they were walking past the women in their respective communities.

“What about that is going to either deter that criminal from offending or give those women confidence that the system in which they are operating is fair and just? How did their feelings come into that?” he questioned.

Further, he cited cases in which individuals have been convicted for possession of, and dealing in, cocaine with a street value of between US$1 million and US$10 million and were fined J$500,000 and J$1 million “as the consequence of trafficking cocaine through this country”.

“What is the business decision that trafficker is going to make when he pays US$3,000 to get through US$1.5 million worth a product?” he said, while acknowledging that the issue is “not as straightforward as that”.

Anderson said that Jamaica must begin to have a “different conversation” around these issues and indicated that they have been raised with the judiciary and the Ministry of National Security.