‘There was no other option’

Gov’t would have lost support if Green stayed – prime minister 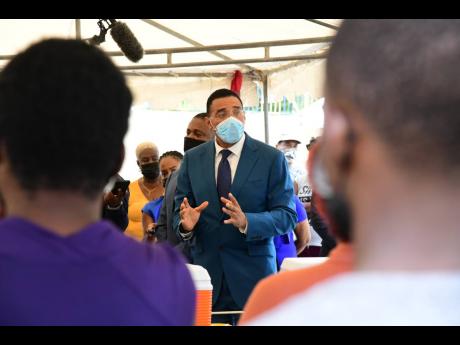 Retaining shamed Agriculture Minister Floyd Green in the Cabinet would have damaged public confidence and compromised the Government’s campaign for compliance with COVID-19 health regulations in the worst phase of the disease, Prime Minister Andrew Holness has disclosed.

Labelled by Holness as “a watershed moment in our politics”, Green’s resignation on Wednesday came hours after a social-media storm swirled over a video of him, Mona division Councillor Andrew Bellamy, and others partying maskless at the R Hotel in New Kingston and toasting to no-movement day.

The festivity contrasted with the agony the lockdowns have caused thousands of Jamaican business people and householders and was a source of national embarrassment for the administration.

But while describing Green’s departure as a loss for the executive, Holness emphasised that “there was no other option”.

Public officials and others in authority, Holness said, should abide by the coronavirus laws, and leaders must set the tone for the type of society in which they want to live.

“If there is any break in that synergy between the executive authority giving the mandates, the orders under the Disaster Risk Management Act, and the confidence that we ourselves are not just preaching but doing what we are preaching ... then the level of voluntary compliance will fall, and it will become difficult to manage the pandemic in the way which we have done by getting public support,” Holness said.

The prime minister concluded that Green’s action exemplified “a break in the moral suasion link” by not practising what the Government has been preaching.

Green, a second-term member of parliament for St Elizabeth South Western, was given the mantle at the Ministry of Agriculture after the administration’s September 3, 2020, landslide victory over the Opposition People’s National Party.

An attorney and former president of the Jamaica Labour Party’s young professionals group Generation 2000, Green was viewed as a rising star in Holness’ Cabinet and a fresh face charting a modern path for agriculture

He cut his teeth as state minister under the apprenticeship of Ruel Reid, in education, youth and information, and later, Audley Shaw, in the superministry covering agriculture, fisheries, industry, and investment.

Green is the fifth minister in three years who has had to either resign or be reshuffled because of controversy, following in the ignominious footsteps of Reid, Andrew Wheatley, Daryl Vaz, and J.C. Hutchinson.

Even as he condemned Green’s actions, Holness cut a sympathetic figure on Wednesday, describing his remorse as “admirable”.

He said that the experience and expertise of the former agriculture minister may be tapped in other parts of Government.

“He could have taken the view that, ‘Bwoy, I want to hold on, and I’ll just apologise’, but there is a deeper understanding that was exhibited, which, in countries like Jamaica, which is a liberal democracy,” said Holness.

“It is very important that citizens feel that their leaders, their executives, those persons who have executive authority, that they face the same consequences as every other citizen and are living by what they preached.”

Meanwhile, Bellamy also resigned from the board of the South East Regional Health Authority and from all committees that he chaired at the Kingston and St Andrew Municipal Corporation.

The prime minister indicated that he has referred the video to the police for action.

Commissioner of Police Antony Anderson confirmed that an investigation has been launched.