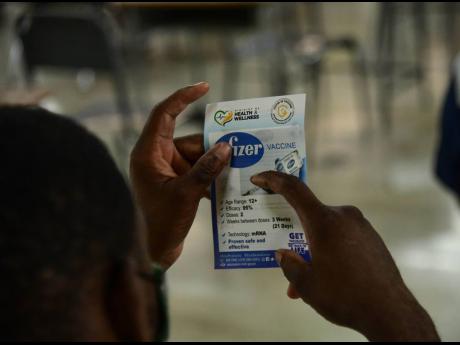 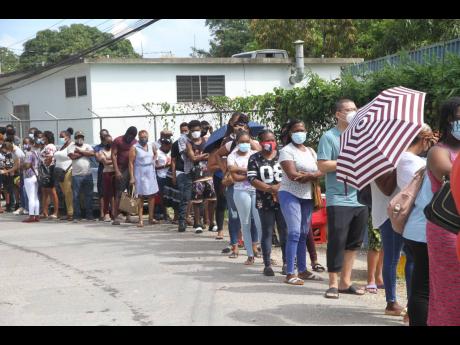 File
Scores of persons queue up for the vaccination blitz at Denbigh Primary School in May Pen, Clarendon, last Sunday, resulting in long lines extending beyond the gate. Dispensation of the Pfizer vaccine has been discontinued because stock is running out. More doses of Pfizer are not expected before the next two to three weeks.
1
2

Parents in some rural communities are hoping that the health authorities will make a greater push in bringing vaccination sites closer to home to ease the challenges they face in getting their children to various locations to take the jabs in anticipation of a return to face-to-face classes.

The education ministry has said that secondary schools will not return to face-to-face teaching unless they achieve a vaccination rate of at least 65 per cent.

Several parents have expressed concern that although the Government started offering the Pfizer vaccine to children 12 and older on August 21, the distance and cost associated with getting to the vaccination sites – especially on the no-movement days – as well as the long waiting time at the centres have been among their challenges.

The same holds true for some adults who say that they would take the jab but are not inclined to commute long distances to get it.

The situation is compounded by the fact that it is generally difficult to access public transportation in some of these areas and even more so during the lockdown.

Residents of Richmond Park, Bagatelle, Stewarton, and Foga in North Central Clarendon and Kemps Hill in the southwestern section of the parish all had the same complaint.

A trip with her three high-school-aged children to the nearest vaccination site at the Denbigh Primary School proved, for 36-year-old Thebbie Williams of Stewarton District, a “costly $5,000,” she said. “Because the taxis don’t run on the no-movement days.”

For Michael Spencer, his niece, who attends a Kingston-based high school but who is staying with her family in Darlough, is not likely to get the jab unless “it is more convenient”.

“The nearest [point] would be more convenient because right now, you go Denbigh and it full up,” he said, pointing out that it could be an all-day affair waiting to be processed.

He suggested that a site be placed at the Darlough Health Centre for ease of access.

“All those who don’t want it, when it comes into the community, they will take it,” he reasoned, adding that he is keen on taking the jab due to his line of work.

Online school has also proven costly, Spencer said, noting that his family spends roughly $12,000 per month to supply his niece with data for Internet access.

Richmond Park resident Nicola Walker also suggested that the sites need to be closer to home to drive vaccination rates.

“If they bring it to Cedars where our health centre is, that would be easier for us. They have it at Denbigh, Kellits, and Chapelton, [but] that is very stressful because we would have to charter a vehicle,” she said.

Walker is also anxious for her son to get vaccinated and return to the classroom as he did not do well with online classes last year.

For the older residents of the Bagatelle community like 73-year-old Calvin Lewin, or Maas Joe, as he is affectionately called, “how fi ketch” is the riddle he and others of his age group are trying to solve.

“It a gi out, but you don’t know where to go and how fi ketch deh,” he reasoned, suggesting that the political representatives should assist residents with transportation to the sites.

“Is the councillor and him MP (member of parliament) supposed to thrash out dem things deh fi get the [children] to the health centre,” Maas Joe said.

The Gleaner also caught up with guidance counsellor at the Lennon High School and resident of Stewarton District Ainsworth Kelly, who also noted that the “willingness of parents” to get their children vaccinated is being thwarted by the distance of the sites.

“As a rural community, we are faced with challenges as the [vaccination] blitzes are held on no-movement days and away from the community. This poses a challenge to our parents to get their children out to these sites because not only are the sites far, but it is costly to transport the children to these areas,” Kelly said.

He suggested Lennon High as a “central location” since it stands at the “cross roads for those coming from Stewarton, Richmond Park, Ashely, Foga, Bowens Gate, and many other areas”.

Only one vaccination drive targeting adults has so far been held at the Mocho Health Centre, a stone’s throw from the Lennon High School, parish manger for the Clarendon Heath Services, Joseph Grant, said.

He conceded that the sites may be “too far” for some rural area folks but said the issue was being addressed.

In the lower Clarendon community of Kemps Hill, the concerns were much the same. For the most part, the vaccination sites have been at Denbigh and Lionel Town.

Residents, therefore, expressed joy at the planned staging of a blitz at the Kemps Hill High school for this weekend.

“We can walk go. Is the right place now. It was difficult to go Lionel Town,” Rovell McLean, groundsman at the Kemp Hill High School, said.

With the Alley Bridge severely affected by Tropical Storm Ida recently, the residents found it even more difficult to get to the vaccine sites in Lionel Town, he said.

For Grant, staff limitation has impacted the roll out of more sites.

“For example, if we have 70 persons [working] in a vaccination site, occasionally, we have to split that group to send them somewhere else. So all of this logistics come into play when we have to plan the schedule to go right across the parish,” he said.

Prime Minister Andrew Holness has voiced plans to increase the number of vaccinators, including inviting members of the diaspora to participate in the process.

The Ministry of Health has also launched its mobile vaccination drive – an element of its community- based intervention – aimed at reaching people where they live, work, and carry out regular activities and at cauterising the spread of the virus as the country grapples with the third wave of infection.

The student vaccination drive has, however, hit a snag, with the health ministry suspending the administration of the Pfizer vaccine due to a shortage of supply. A shipment is expected from the United States in the coming weeks even as the Ministry of Education pushes for an October return to the classroom.

Education Minister Fayval Williams said that some 73,880 students have so far received at least one shot of the vaccine.