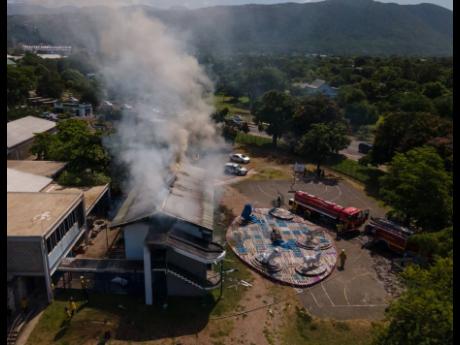 Gladstone Taylor/Multimedia Photo Editor
Firefighters working to extinguish a blaze at a painting studio at the Edna Manley College of the Visual and Performing Arts in Kingston yesterday. The probe into the cause of the fire and an assessment of the damage could take a month, officials have said. 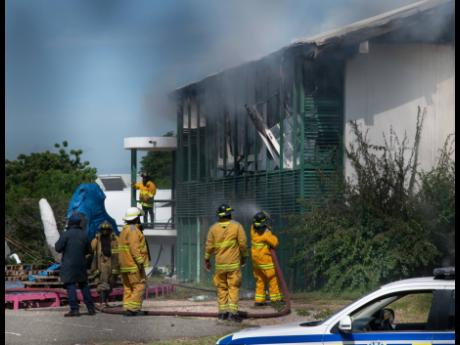 Gladstone Taylor/Multimedia Photo Editor
Firefighters conduct cooling-down exercises on a building which was razed by fire at the Edna Manley College of the Visual and Performing Arts in Kingston on Friday.
1
2

Nine Edna Manley College of the Visual and Performing Arts students who were in the vicinity of a fire, which broke out at the St Andrew-based fine arts institution on Friday, are receiving counselling.

The students, most of whom are in their final year, were shaken by the experience but have not received physical injuries.

The fire razed the painting studio at the School of Visual Arts early on Friday and Marketing and Communications Director Coleen Douglas explained that the area is more of a work room than a traditional classroom setting.

“It’s a space that the final-year students use to plan and prepare for their final-year projects. So it would mean something to them as having spent the last three years working there, they would be attached to it, and so there is a sense of loss,” she told The Gleaner.

Douglas said that the guidance counsellor and the acting dean of the school have met with the students and continue to provide counselling. The education ministry has offered to provide further counselling next week.

“I think that at the end of the day, when the smoke clears, all will be well,” Douglas said.

The area will remain off-limits to students as the Jamaica Fire Brigade (JFB) investigates the cause of the fire and carries out an assessment of the damage.

JFB Public Relations Officer Emeleo Ebanks explained that based on the extent of the investigations, it could take as long as a month before a report on the fire can be submitted.

“We have to do excavations, recreate the scene, and do witness statements – all of that – and then put them together, and worst-case scenario, we might even have to do forensic investigations. So at best, it could take a month,’ he explained.

No one was injured in the fire, which started some time after 9 a.m., with the York Park Fire Station receiving a call at 9:25 and responding with three units. It took about 30 firefighters to bring the blaze, which was confined to one building, under control.

Douglas pointed out that the building will be out of use for some time as it will need to be repaired when the investigations have been completed.

In 1929, she was awarded the Institute of Jamaica‘s Silver Musgrave Medal and in 1943 became the first recipient of the gold Musgrave Medal for her outstanding contribution and leadership in the arts in Jamaica.