Caught between gunmen, residents in crossfire live on the edge 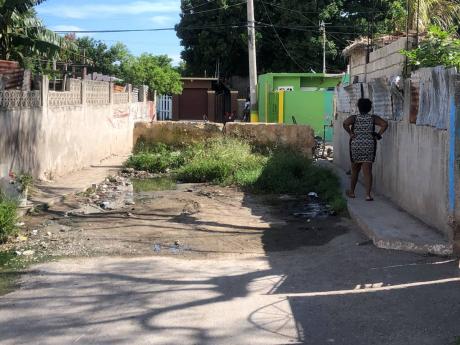 Photo by Andre Williams
A woman walks past a blockade at the intersection of Stevens Lane and Bowens Road in Kingston. Greater Kingston is a bubbling pot of turf wars that place persons living on borderlines at risk of death and injury from rival gangs. 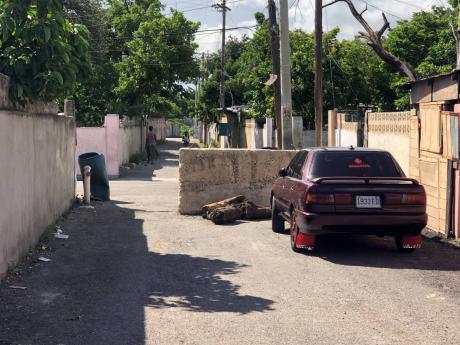 Photo by Andre Williams
A concrete barrier at the junction of Harvey Road and Kidd Lane in Kingston.
1
2

On Tuesday, September 7, a coronavirus no-movement day, heavily armed gangsters from Stevens Lane traded bullets in the Chinese Cemetery on Waltham Park Road with rival gunmen from Pretoria Road affiliated with the Spade Corner Gang. The fury was a...

The fury was a stark reminder to residents of Whitfield Town and nearby communities that living on the borderline can be a matter of life and death.

There were no reports of injuries from the latest gunfight, but, for Bev, it was another close call.

“It never pretty. About 70 rounds exchange … . Whole heap of shot. The man dem from over Spade a screechy go ‘cross the lane and lane man dem inna the cemetery and see dem,” she told The Gleaner.

Bev said the cemetery is an established borderline and a route used by factions to carry out attacks.

Householders like Bev live on a double dose of daily fear, wondering if they will fall prey to the spray of bullets or be thought to be sympathetic to, or supportive of, arch-enemies.

Jamaica’s many inner cities are a battleground of violent insurgents who trade in the currency of bullets and blood in turf wars and revenge killings.

Bev disclosed that borderline folk observe a code of silence to preserve life, limb, and livelihood.

“You haffi see and blind, hear and deaf. We nuh inna no violence, but a here so both sides watch and protect fi mek sure nobody who is of harm cross over,” she said.

Not far from that section of the community is Fitzgerald Avenue, where residents of Bottom and Top have been at odds for decades.

A military post has been placed at the corner of Bertram Lane and Scott Road, another borderline, but that has not stopped attacks.

Gangsters still find ways and means of executing their plans and targets.

The security forces have used slabs of concrete to close vehicular access from Bowens Road to Stevens Lane, and from Harvey Road to Kidd Lane.

The roadways and communities, though connected, have been preferred routes for drive-by shootings and other acts of violence.

In central Kingston where murders and shootings have been rampant, residents told The Gleaner that Maiden Lane and Gold Street have, for years, been the borderlines.

“From inna the ’60s, mi live it out, but what is happening now is different. Is not politics war going on.

“You who live ya suh, you haffi jus know how fi live with the two sides,” an elderly woman, who requested anonymity, said, explaining that the latest round of violence has been gut-wrenching.

A community shop has suffered from a downturn in business, with the proprietor claiming that sales have dwindled since the outbreak of violence.

“Around here is considered the border, and, since the bad vibes, people nuh really come out and dem nuh send the children either. Before the full-on war, people from both sides came here to shop,” the owner said.

In western Kingston, Sunlight Street is another road which has been divided between into Front and Back, with gangsters aligning with both factions.

Those who reside at the Back, closer to Greenwich Street, are persona non grata at the Front, nearer to Maxfield Avenue, our news team was informed.

The imaginary borderline is located at Duff Street.

“We have to call taxi in order to leave the community. If we walk to the front, dem stone we, and all sort of things,” a resident said.

Gang violence has been blamed for the overwhelming majority of murders in Jamaica.

The country recorded 991 murders – 843 by the gun – between January 1 and September 11, a 10 per cent increase year-on-year, according to the latest statistics released by the police.

On July 12, a six-month-old baby was shot in the head when gunmen braved the borderline and entered a yard to the Back, unleashing terror on a house occupied by women and children.

Senior Superintendent of Police Kirk Ricketts, head of the St Andrew South Police Division, where the September 7 shooting occurred, said that law enforcers have not come in contact with suspects over the last two nights, while carrying out patrols.

“We tend to have quite a lot of reports of gunfire in these communities,” said Ricketts.

Residents reported that, in the aftermath of the cemetery shooting, the police deployed tactics they had never before seen.

“Two Probox loaded with police pull up on Fitzgerald Avenue. One have on red plate and the other have on taxi stripe,” a householder, fearful of recrimination from the police, recounted to this newspaper.

Ricketts declined to discuss police operational strategy, but said that the constabulary would not discourage personnel travelling in taxis to apprehend criminals.

“That would put at risk other taxis who enter these communities. That is definitely something we would not want to do,” he said.