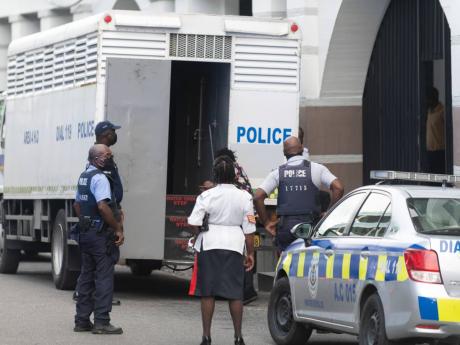 File
A prisoner transport vehicle waits outside the Supreme Court building where the Uchence Wilson Gang trial was under way on Thursday, October 8, 2020. Thirty-three alleged members of the Clansman Gang face their date with destiny today.

With the slim success that the Jamaican authorities have scored over the last three years with the prosecution of four criminal organisations, much rides on the ability of the much-touted anti-gang legislation to secure convictions against 33 alleged members of the ruthless Clansman Gang.

The alleged gangsters, including Andre ‘Blackman’ Bryan, the reputed leader of the One Don Gang – a splinter of the St Catherine North-based Clansman – are all expected to begin their trial today in the Home Circuit Court.

The trial, which is believed to be the largest anti-gang trial in the English-speaking Caribbean, will see the 32 men and one woman being tried under the Criminal Justice (Suppression of Criminal Organizations) Act, 2014, better known as the anti-gang legislation, on an indictment with 25 counts, for allegedly being part of a criminal organisation in a judge-alone trial.

The legislation came to the fore in 2014 as a major crime-fighting tool, which would significantly help to dismantle the country’s criminal empires and, by extension, help to reduce the murder rate, which police have primarily attributed to marauding gangs.

But the law has had more failures than successes as all the members of the Dexter Street, Burgher Gully, and King Valley gangs prosecuted under the anti-gang act were freed, while 15 of 24 defendants arrested in the Uchence Wilson case were also acquitted.

Since then, many stakeholders in the judiciary, the politico, and law enforcement, including defence counsel, have highlighted a number of shortcomings, including lack of provision for search warrants, which they believe have compromised the viability of the act. Those matters are expected to be addressed in a review of the legislation.

Noted defence lawyer Peter Champagnie, QC, who was involved in two of the referenced gang trials, believes that there is too much dependence on the evidence of the main witness in these cases.

“The challenge I find with these cases is that a heavy reliance is often placed on a particular individual who, for all intents and purposes, is a self-confessed criminal, and in that regard, there is always a deficiency in terms of the starting point for the prosecution,” said the criminal defence lawyer.

“Having said that, it is hoped that in going forward, prosecutions of this nature would factor another witness who is able to corroborate what is said by these self-confessed criminals.”

Champagnie argued that lawmakers should expeditiously amend the current anti-gang legislation to address the shortcomings of search warrants and the reception of electronic evidence into trial.

He also hopes that prosecutors and investigators have learnt from the experiences and judgments of the previous anti-gang trials.

“Like the rest of Jamaica, and as someone who is part of the legal system, it will particularly be interesting for me because I would be curious to see how, if any at all, the approach will be different from other past cases that have been tried in the courts, and it makes good for the precedent to follow,” Champagnie told The Gleaner.

“All I can tell you is that the Crown is ready,” she quipped, repeatedly, on Sunday.

Deputy Commissioner of Police (DCP) Fitz Bailey, who captains the crime portfolio, also declined to speak in detail on the constabulary’s expectations heading into the trial or whether investigators were more confident of their chances in securing conviction of all defendants this time around.

“We do our work and we hope for the best,” he said, adding that any shortcoming in the act was a matter for the judiciary.

Bailey indicated that the police would be ramping up security for the witnesses and court staff, including prosecutors and judges. The precincts of the court will be heavily manned, he said.

“We will be putting in the appropriate security measures to ensure that the trial is undisturbed,” he said.

As part of the police’s security detail, the intersection of King and Tower streets, as well as King and Barry streets, will be closed today between 8 a.m. and 5 p.m.

The police raised the threat level on Sunday for its members in the St Catherine North Division who had arrested and charged the alleged gang members and whose operatives were said to be planning attacks on lawmen in the division.

Along with the 33 defendants, about 40 lawyers, four prosecutors, and 43 witnesses will be involved in the trial, which will be conducted in two courtrooms with the use of technology.

The 33 defendants were among 53 alleged gang members who were captured in different police operations. However, 20 of them were later freed by the court after prosecutors found that they did not have sufficient evidence against them to mount a successful case.

The One Don Gang reportedly emerged after the Clansman Gang split during an internal power struggle between the reputed leader of the Clansman, Tesha Miller, and Bryan, who was allegedly once his top lieutenant.

Control of the lucrative extortion racket, which reportedly rakes in $1.5 million daily, was said by the police to have been at the heart of the conflict that for years had been a major factor fuelling the high incidence of crime in the parish.