Cops on high alert after sergeant gunned down 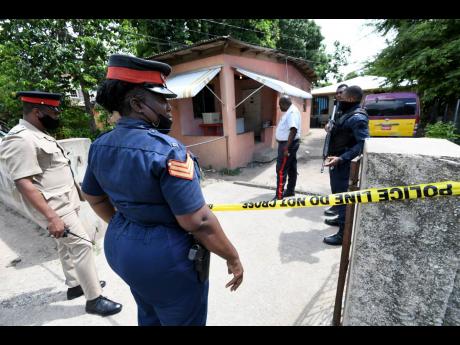 Rudolph Brown/Photographer
Inspector N. Brown (left) and other police gather at the house where Sergeant Averel McCollin was shot by gunmen in Gregory Park, Portmore, on Sunday. McCollin died while undergoing surgery at the Spanish Town Hospital.

The National Intelligence Bureau has warned police personnel in the St Catherine North Division to be on the alert in the wake of a fatal attack on a cop in Gregory Park, St Catherine, early Sunday.

The advisory coincides with today’s start of the trial of the Blackman faction of the St Catherine-based Clansman Gang.

“Criminals are planning to stage attacks on the police in the St Catherine North Division. Exercise all caution on or off duty,” the bureau warned, adding that the threat level against police personnel is deemed to be high at this time.

McCollin was playing dominoes with a group of men more than seven hours after the national coronavirus curfew took effect.

McCollin was shot about 1:25 in the morning and succumbed to his injuries more than an hour later while undergoing surgery at the Spanish Town Hospital in the parish.

The Gleaner understands that McCollin and friends were engrossed in a game of dominoes when they were ambushed by the gunmen, who opened fire on the group, hitting the cop several times. The other persons were not hurt.

McCollin, 57, was assigned to the Hunts Bay Police Station in St Andrew and had been a policeman for more than 30 years. He was described as well known and well liked in the Gregory Park community.

The body of Atkins, 45, of Green Acres, St Catherine, was found on September 15 with what appeared to be a gunshot wound.

The policeman, who served at the August Town Police Station, is said to have lived alone.

Atkins’ service pistol was recovered near his body.

Inspector Stephen Taylor, sub-officer in charge of the August Town Police Station, said that the late cop’s colleagues are in mourning.

“We are a family here,” Taylor said. “We called him ‘Knock Softly’ as he was reserved.”

“One regret is that he was so quiet that he failed to reveal if he had a problem,” Taylor said.