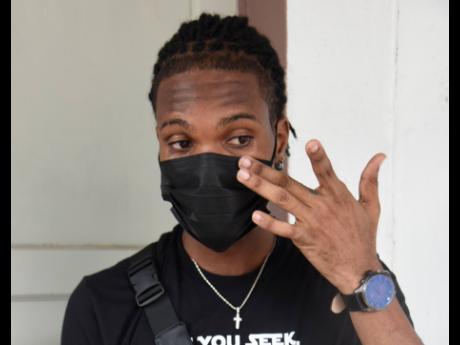 Nicholas Nunes/Photographer
Dewayne Cameron says that he has been left traumatised after seeing the injuries his infant son sustained after being beaten on the weekend. 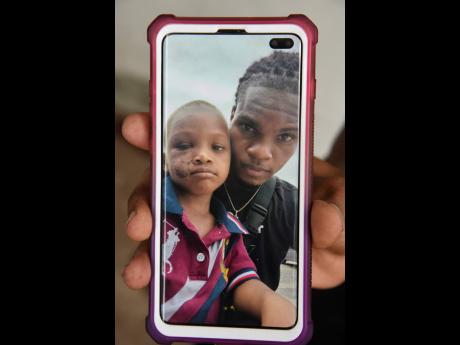 Dewayne Cameron and his three-year-old son, Jamarie, in a shot at the Bog Walk Police Station in St Catherine yesterday.
1
2

When Dewayne Cameron received a call on Saturday that his three-year-old son, Jamarie, was allegedly badly injured in a domestic dispute in St Catherine, he became so angry that he had to discontinue his participation in a video shoot under way....

When Dewayne Cameron received a call on Saturday that his three-year-old son, Jamarie, was allegedly badly injured in a domestic dispute in St Catherine, he became so angry that he had to discontinue his participation in a video shoot under way.

The fact that the call also came close to the start of the 6 p.m. curfew – and Sunday being a no-movement day – added to his distress as he would not be able to leave Kingston and head to Bog Walk until Monday morning.

He was left shaken after seeing his son yesterday.

“I was very emotional. My heart started beating fast. I didn’t know what to do. I was so traumatised to see my child’s face like that,” Cameron told The Gleaner after visiting the Bog Walk Police Station on Monday. “When I saw him, there were bruises all over his face. His left eye was plastered ... . His left eye is swollen.”

While feeling helpless during the lockdown on Sunday, Cameron took to Instagram to detail his hurt and anger as he shared a photograph he received of his son with bruises and a bandage on the left side of his face.

The mother of the infant, Amanda Easy, told The Gleaner that the child was badly beaten by a male figure after being accused of making marks on a bus.

Cameron said he told her to make a report to the Bog Walk Police Station after she made her first distress call to him after an initial argument with the accused.

“Upon filing a complaint in Bog Walk Police Station, they instructed her to go to the community where the incident took place. At that other police station, she then filed a report there,” Cameron told The Gleaner.

“I didn’t like the fact that they told her to go back to the community. They should have brought her there, so I took it up in my own hands by posting the photo of my son on social media and it went viral,” he said.

“Being a father, I have to speak publicly about this situation. I’m taking legal action now ... . There is nothing in this world my little child could do to deserve all of this. This man needs to be in prison for the rest of his life,” he said.

Yesterday, Senior Superintendent Stephanie Lindsay, who heads the police’s communications arm, told The Gleaner that the man will likely be charged as the child’s mother has now given a statement to the police.

“The police wanted to lock up the [accused], but at the time, the mother had refused to give a statement. However, she was again contacted and they have now recorded a statement,” she said, noting that the Child Protection and Family Services Agency (CPFSA) was also working with the police in the matter.

Last night, the CPFSA said that its investigators had conducted interviews with both parents and initiated intervention to serve the best interest of the child.

“The agency will continue to monitor the child with counselling being planned for the family,” the CPFSA said as it urged parents to prioritise the protection of their children and not to resolve disputes in a manner that will cause them harm.