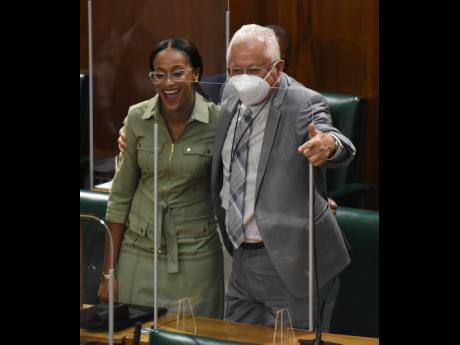 First-time Member of Parliament (MP) Rhoda Moy Crawford used her state of the constituency address on Tuesday to deliver a stinging rebuke of government agencies, criticising the red tape that she says has hindered work in her Manchester Central constituency.

Crawford said the snail’s-pace response, bureaucracy, and shortcomings in some state agencies were her greatest challenges to resolving issues.

“This ties with the one-size-fits-all distribution of resources via the Constituency Development Fund. The challenge with this approach is that the constituencies differ in size and needs,” she said.

Crawford argued that there was no equity in using an identical model of distribution across all constituencies.

“Certainly, the time has come for us to accelerate our examination of systems and processes to determine what needs to be revamped and/or revised to allow for greater efficiencies and value for spend. At the same time, we must begin to subject each responsible officer in our state agencies and the elected officials in central and local government to the same levels of scrutiny and accountability,” she said.

Hanover Eastern MP Dave Hume Brown criticised procurement processes, arguing that roads earmarked for rehabilitation within his constituency, one from as far back as 2016, are yet to be fixed.

He listed a slew of road projects that he said were stalled at the procurement stage for reasons that remained unclear to him.

“We must think of the time value of money and also the hundreds of lives that are impacted by the delays due to procurement,” he added.

Crawford, who defeated Peter Bunting, a four-term MP last September, told Parliament that she was using her first term to right the wrongs of her two predecessors, including John Junor, during their tenure.

She said $23.5 million was spent on road repairs, while an additional $60 million has been approved for more repairs.

She said $2.5 million has been committed to the trucking of water to communities currently without supply, while 100 water tanks have been donated to homes and churches.

One hundred and three students have benefited from education grants, she said, while 130 tablets and laptops were given to students.

Brown, who was reporting at his third state of the constituency debate, said education has been at the top of his priority list in the last year.

He said Hanover Eastern is among the constituencies most affected by challenges brought on by the COVID-19 pandemic.

The MP said that all 17 schools in his constituency have reported difficulty accessing the Internet.