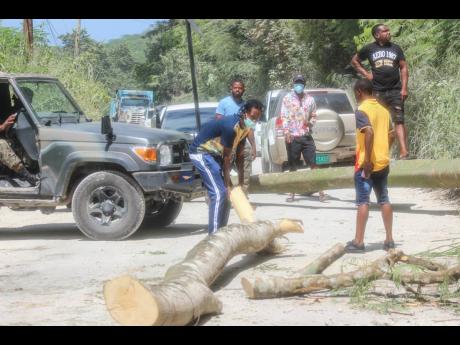 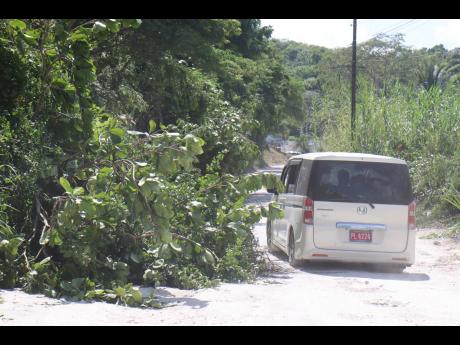 Ashley Anguin/Photographer
A taxi operator passes trees that were cut down by angry protesters to block the Friendship main road in St James.
1
2

Even after months of demonstrations and threats from residents of Friendship and surrounding communities in St James over poor road conditions, the National Works Agency (NWA) says there is still no definite timeline for a fix.

This is in spite of Tuesday’s most recent demonstration by Friendship residents who cut down trees and burned debris along the roadway for the second day in a row. They said that the main road has been in disrepair for at least five years.

Janel Ricketts, community relations officer at the NWA’s western regional office, said that two-thirds of roadway from Fairfield to Friendship has been repaired to date. Ground zero of Tuesday’s foment was in the unfinished section.

Ricketts could not provide a timeline for the completion of the rehabilitation.

The works are part of a three-phase programme that started from the Fairfield bridge. Over the last three years, said the community relations officer, four kilometres of roadway has been completed. The full stretch measures 6.1 kilometres.

“The third phase has not come on stream yet, and unfortunately I am not in a position to say exactly how soon it will start, but it is being given serious consideration,” Ricketts told The Gleaner.

The roadway, which runs from Montego Bay to areas such as Tucker, John’s Hall, and Spring Mount, has been a long-standing source of grief for motorists and residents alike. On several occasions they have pointed to the road’s dusty conditions as a health hazard, while numerous potholes and a dearth of street lighting put commuters at risk of robbery at night.

Demonstrations were previously held in June and July. At those times, residents had threatened to escalate their protests if Edmund Bartlett, member of parliament for St James East Central, where the affected area is located, did not respond to their calls in a timely and satisfactory manner.

When contacted on Tuesday, Bartlett told The Gleaner that the responsibility for the repairs rests with the NWA. He had been given a commitment from the Ministry of Transport and Works for its completion.

“I have been pushing as hard as possible, but the NWA has to do the final works to complete the programme, which started in 2020 and stopped at Friendship,” said Bartlett.

Transport Minister Robert Montague reported that the contract for repairs has been put to tender, said Bartlett.

But such assurances will mean little to the affected residents, who are insisting on immediate redress.

“This whole week round ya mash up. We done talk. Is action time now,” one disgruntled protester vowed.

A resident of The Estuary Housing Scheme in Friendship voiced support for the protesters’ actions.

“They can block it 50 times and more until the authorities fix it. We are paying our taxes, so we need to get something for our taxes, because the road should have been fixed a long time ago,” he said.