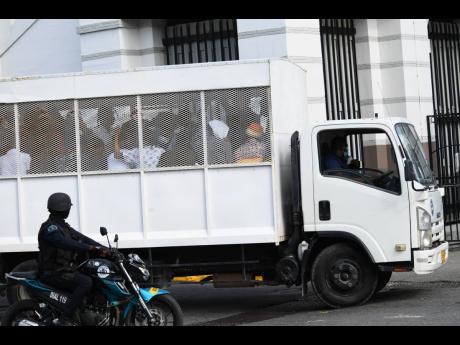 Rudolph Brown/Photographer
A motorcycle cop keeps a watchful eye on a police truck with some of the alleged members of the One Don faction of the Clansman Gang near the precincts of the Home Circuit Court on Monday.

The trial of the 33 alleged members of the One Don Gang will resume Wednesday morning in the Home Circuit Court after technological difficulties forced an early adjournment Tuesday.

One of the two main witnesses, a self-confessed member of the gang, who should have testified Tuesday, will start giving evidence this morning from a remote location via video link.

Because of the large number of defendants involved in the trial — the largest in the English-speaking Caribbean — the main players are being accommodated across two courtrooms that are connected by video-link technology.

But following a smooth flow of the technology on Monday, the opening day of the trial, the technology suffered a glitch on Tuesday and there was no connection between the courtrooms.

The problem, which was detected minutes into the morning session at 10, led to Chief Justice Bryan Sykes mandating a break.

However, about an hour later, a slightly irritated Justice Sykes, who appeared to have run out of patience waiting for the technicians to fix the matter, returned to court and hurriedly adjourned the proceedings.

“Whatever the problem is, it can’t be resolved, and I can’t be sitting here waiting,” he said before remanding all the defendants, except Andre Smith, whose bail was extended.

Some of the defendants were also visibly upset. While reputed gang leader Andre ‘Blackman’ Bryan registered his displeasure by hissing his teeth loudly and mumbling, others could be heard saying, “Mi waa go home,” and “Dis a waste o’ time.”

The 33 are being tried on an indictment with 25 counts under the Criminal Justice (Suppression of Criminal Organisations) Act and the Firearms Act, to which they have pleaded not guilty.

The defendants are accused of being part of the St Catherine-based One Don Gang, which is believed to have carried out murders, conspiracies to commit murder, extortion, and arson throughout the parish between January 1, 2015, and June 30, 2019.

The One Don Gang is a splinter group of the notorious Clansman Gang. The new faction was reportedly formed during an internal power struggle between the reputed leader of Clansman, Tesha Miller, and Bryan, who allegedly was a top lieutenant of Miller’s.

Miller is serving a nearly 39-year prison sentence following his conviction last January on charges of accessory before and after the fact of murder in relation to the 2008 killing of Douglas Chambers, then chairman of the state-owned Jamaica Urban Transit Company.