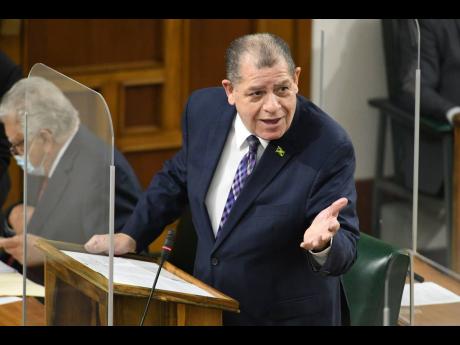 Rudolph Brown/Photographer
Audley Shaw, minister of agriculture and fisheries, making his presentation at the House of Representatives on Wednesday.

Farmers hit hard by the effects of tropical storms Ida and Grace in August are to receive support from the Ministry of Agriculture to purchase seeds and other inputs such as pesticides to get back into full production.

Agriculture Minister Audley Shaw announced on Wednesday in Parliament that $100 million was being allocated to assist farmers.

Of the sum being disbursed, $70 million will be allocated to farmers who suffered widespread damage to crops, while $30 million has been set aside to support the poultry and small ruminant industries.

In a statement to Parliament, Shaw told colleague lawmakers that another $100 million would be allocated to farmers who have been facing rapid increases in the price of fertiliser, which affects the cost of production.

The agriculture ministry will also provide $50 million towards material inputs such as fertiliser and pesticides for farmers in the banana and plantain industries.

The subsectors were severely impacted by the tropical storms, with an estimated 500 farms being affected across the parishes of St Mary, Portland, St James, St Thomas, and Clarendon.

Quizzed by his opposition counterpart Lothan Cousins on whether the $250 million was sufficient to meet the needs of farmers, Shaw said the sum was an initial disbursement. He said that the Government would provide additional support to the displaced farmers.