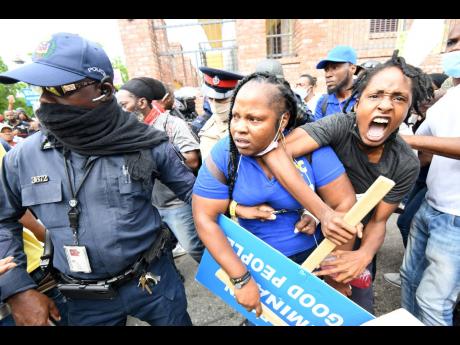 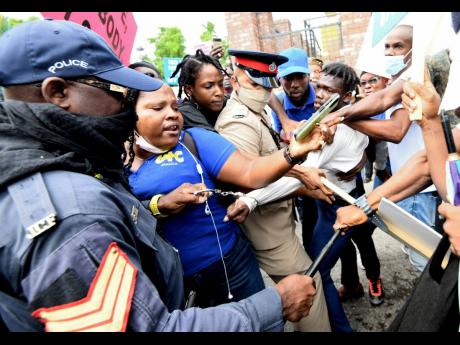 Rudolph Brown/Photographer
Fellow protesters try to stop the police from detaining this young man as they marched towards Gordon House in protest against what they believe is an impending move by the Government to make the COVID-19 jab mandatory. 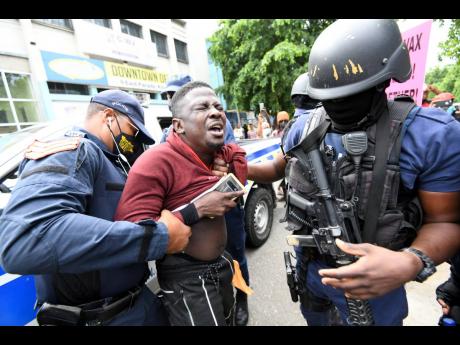 Rudolph Brown/Photographer
Police officers search one of the protesters before detaining him as they tried to break up an unauthorised march against COVID-19 vaccines in downtown Kingston yesterday. 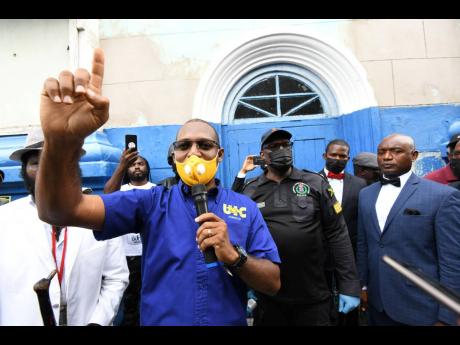 Rudolph Brown/Photographer
Organiser Joseph Patterson, head of the United Independent Congress, addresses protesters during yesterday’s march, moments before he was arrested and charged. 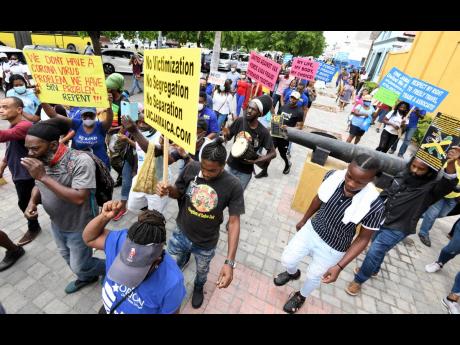 Rudolph Brown/Photographer
Protesters proceed on their march from North Parade in downtown Kingston towards Gordon House in defiance of instructions from the police not to proceed with the unauthorised event.
1
2
3
4
5

Several anti-COVID-19 vaccine protesters were arrested yesterday amid shouts of “Murder! Murder!” as they disobeyed an order not to march with the Joseph Patterson-led United Independent Congress (UIC) to Gordon House in Kingston.

The march was billed as a call to shut down the country and the Government as the UIC also demanded the resignation of all 63 members of parliament and the governor general.

At 9 a.m., the scheduled time for the start of the march, more than 100 upbeat persons stood at the entrance of the Ward Theatre in the heart of the nation’s capital to protest what they believe is an imminent move to force citizens to take the COVID-19 jab, claiming that this was not allowed under the Charter of Fundamental Rights and Freedoms.

Prime Minister Andrew Holness has implied that the Government does not want to make COVID-19 vaccines mandatory. However, in the future, when public education has been exhausted, it may be the only option as what is now the case in Antigua and Bermuda, where a mandatory vaccination policy will be implemented as of October 1.

Several businesses have already implemented vaccine mandates, with the Jamaican Bar Association arguing that the Charter of Fundamental Rights and Freedoms permits private-sector employees to bring a court challenge against employers believed to be infringing on their rights by imposing mandatory vaccination schemes in the workplace. Some lawyers have also argued that the employers are on firm footing as they have a duty to maintain a safe working environment.

With no permit granted for yesterday’s march, Superintendent Steve McGregor warned the gathering protesters against proceeding with the march to Gordon House, the seat of the nation’s Parliament.

“If you don’t want to hear what I’m saying, it’s your choice ... . There will be no march from here to anywhere, and if you do decide to do that, the police will have to deal with you as we see it fit,” he told them as under the Public Order Act, it was unlawful to have a march without a permit.

Patterson told The Gleaner that the march would still go ahead, stating, “We don’t need a permit to walk in Jamaica.”

He said that the protesters were trying to “protect the rights and freedoms of Jamaicans because every Jamaican deserves the right to be free, to move, to speak, and to choose, so we don’t want a Jamaica where you cannot choose what goes into your body”.

He continued: “Our freedoms and rights are being trampled. The Government is trying their darnedest best to force us into something, and we would not allow the Jamaican people to be forced into anything. We have the right to choose. We have not given up that right and we will never give up that right.”

There were scuffles almost as soon as the protesters moved off from North Parade, with members of the security forces detaining some young maskless protesters while the elderly among the group cried for their release.

Even with arrests taking place, hundreds of supporters still marched from North Parade on to Church Street then on to Charles Street, but they were intercepted by the police at Duke Street before they could make it Gordon House.

Patterson was among those eventually arrested.

“In terms of mandatory, we say ‘No!’... . We must understand that there is no obvious benefits of taking this vaccine; no obvious benefits. It doesn’t prevent you from getting COVID. It doesn’t prevent you from sending out COVID or contracting COVID and spreading it, yet still, you want to make it mandatory,” human-rights advocate Abka Kaba told The Gleaner, outlining his reason for turning out.

Another protester, who gave his name as Ras Willie, said he was standing for righteousness.

“If you don’t stand for righteousness, you will fall for anything. How can they say that it is not forced and they are taking away our livelihood and our rights? If we don’t take vaccine, we lose our jobs. We can’t send even our children to school ... ,” Willie said.

Youlette Downer said that she wanted free will to reign.

“I believe everyone should have a right to choose what they want to put in their body or not. It’s not a matter of against the vaccine; it’s a matter of having a choice, whether you are young or old. If something is good, we will realise it,” she told The Gleaner.

Patterson was offered bail with surety following his arrest.