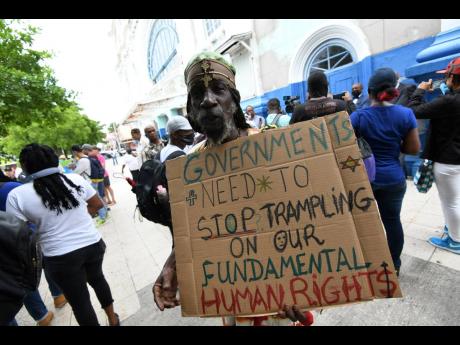 He is also rejecting the use of criminal law in enforcing these measures.

According to the newly amended DRMA, a person in breach who is brought before a parish court judge is liable to a maximum fine of $1 million or to imprisonment not exceeding one year.

Criticising these penalties as defective, Golding argued that the Government’s move to criminalise breaches of the DRMA is defective.

“When they brought the bill to Parliament to amend the act, I spoke out against it because I identified that it was going to cause abusive situations and injustice against the people … but my warnings were ignored,” he said, adding that the new penalties have now resulted in “excessive and oppressive action”.

In addition, Golding recommended that the judiciary also issue guidelines to parish court judges aligning the fines for minor DRMA offences to the levels that have been set for the ticketing system.

Golding’s recommendations follow complaints from several people who were fined up to $200,000 for failing to wear a mask and breaching curfew restrictions when they appeared before the St Thomas Parish Court on Wednesday. The breaches were committed in August.

Speaking with The Gleaner, 24-year-old Kaydreen Nelson, who on Wednesday pleaded guilty to failing to wear a mask, described the penalty as inhumane.

Nelson, who was fined alongside her sister, was told to pay the money or spend 30 days in jail. She had thought she would be fined around $5,000.

“When we arrived at court on Wednesday, we hear people a say the judge a bite hard,” she said.

Nelson said she and her sister were slapped with outrageous fines after they pleaded guilty. Their mother reportedly took out a loan to finance their bail.

“A wickedness to me and mi family. We should have been wearing our masks, but the charge is rough … . We did decide to rub the 30 days in jail because we don’t have it, but when we go and see the condition of the cell, we couldn’t do it. ... Where are we going to find $400,000 to repay that now?” she asked.

Despite outrage from the public and the Opposition, the Court Administration Division is standing by the penalties imposed by the St Thomas Parish Court.

In a press statement issued on Thursday, the agency shared that Section 52 of the DRMA establishes the offences and penalties under this law, the maximum fine for which is $1 million.

It noted that the Sixth Schedule, which outlines the fixed penalties, applies only in instances where tickets are issued by the police. Once a person is brought before the court, that schedule does not apply and the judge is guided by the statute only.