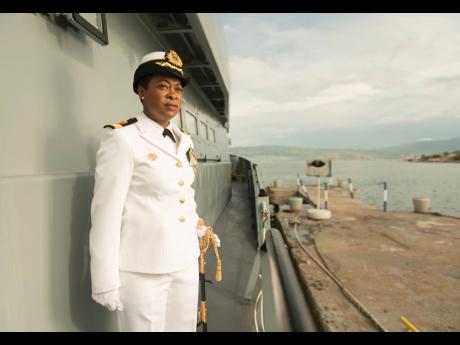 When Commodore Antonette Weymyss Gorman takes the ship’s wheel of the Jamaica Defence Force (JDF) in January, she will bear the hopes of a generation of women hopeful that the new chief of defence staff (CDS) will chart a sea change in the army’s gender dynamic.

Already, there is a weight of expectation from women subordinates looking on, several of whom are quietly optimistic that the history-making executive officer will right endemic wrongs that have, for years, plagued the military, including allegations of sexual assault and victimisation.

“I hope that she will give us something to keep looking forward to; let us feel like we’re actually a part of the Jamaica Defence Force and cause us to be respected. I hope that she will look out for our well-being and promote us according to our capabilities,” one woman soldier told The Gleaner on Thursday, following news of Wemyss Gorman’s appointment.

“I want her to make mothers feel secure and for females not to be afraid of having children with the fear of losing their jobs.”

The soldier, who spoke on condition of anonymity because she is not authorised to speak to the media, said that it is also her hope that the incoming army chief will develop and support programmes that will facilitate the transformation of “ordinary soldiers into figures of versatility”.

Her colleague, who also asked not to be identified, wants the 48-year-old Wemyss-Gorman, who has served in the JDF for 29 years, to “create a much clearer or less bureaucratic pathway for both genders to be able to succeed in the force”.

At the same time, she said that there is no expectation for the CDS-in-waiting, who will replace Lieutenant General Rocky Meade, to favour women in the military.

“She is the best thing to happen to the JDF, and I wholeheartedly support her at the helm. I’m optimistic about the future, and I’m happy to be serving in the force at this historic time,” she said.

There are others, who have now hinged their hopes of success in the military on the senior officer’s rise to the top, believing that a bright future also exists for them in the JDF.

“I am truly excited about the announcement of a future CDS. It gives me hope for my own future here. It’s groundbreaking, really, and I personally have high expectations of Rear Admiral Wemyss-Gorman,” another army woman said.

But Dr Maziki Thame, senior lecturer at the Institute for Gender and Development Studies at The University of the West Indies, has cautioned that Wemyss Gorman’s appointment not be seen as a panacea to the age-old issues affecting the military.

“While we applaud the advancement of individual women in male-dominated structures, we have to ask whether those appointments shift norms of behaviour that favour men, violence, and inequity as well as inequality,” Thame told The Gleaner on Thursday.

She noted that women do not always support equality, justice, or freedom simply because they come from a vulnerable or oppressed group.

Thame said in the context of Jamaica, the situation is contradictory as while there are definite advances for women, there is no overarching change in the social structure or the values that support inequality.

“So, while you have Portia Simpson Miller and other similar important firsts for women, women still over-represent in low-wage employment, for instance. We have to ask why that happens and how we can fix it,” she said.

Retired Deputy Commissioner of Police Novelette Grant, who served briefly as acting commissioner of police, expects Wemyss Gorman to excel in the position but said that she will not escape serious scrutiny.

“She has done a fantastic job in reaching where she is, so my expectation is that she’ll hit it out the park,” said Grant.

Wemyss Gorman has held various command appointments across the JDF and is responsible for the establishment of the Caribbean Military Maritime Training Centre and the Maritime Air and Cyber Command, which includes the JDF Coast Guard, the JDF Airwing, and Special Forces.

“She won’t escape a certain level of scrutiny from the perspective of gender because she is now the unicorn in terms of the organisation, and it is not unnatural in the sense that people want to see how differently a woman will do things,” said Grant.

“However, the skills people are finding to be very important these days in leadership are soft skills. The value you place on people and getting things done through them,” she added.

The JDF steadily increased the proportion of women in the army from 10 per cent to 20 per cent, Meade told The Gleaner in March 2019, but his ultimate vision is of a force in which gender ratio references are immaterial.

“My long-term goal is to set standards, and whoever meets the standard would come in without reference to gender or anything else, the same way we don’t refer to colour and we only refer to height, because there are some practicalities with holding the rifle,” he said at an Editors’ Forum.