Cooking gas may have been source of mystery odour 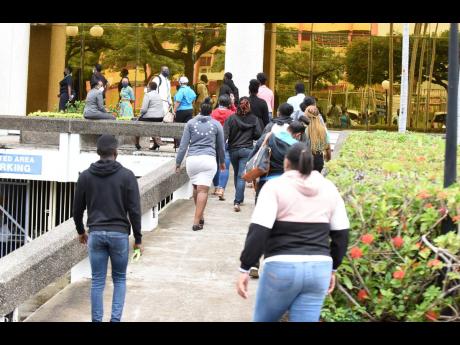 Kenyon Hemans/Photographer
Employees gather outside the NCB Towers on Oxford Road on Tuesday after workers reported smelling noxious fumes. Many office complexes in New Kingston and surrounding areas were evacuated and closed early because of the odour.

The mysterious noxious fumes that forced evacuations and early closure at a number of organisations in the Corporate Area on Tuesday may have been caused by a cooking gas leak.

The fumes, which were believed to have started emanating late in the morning, were detected mainly in Half-Way Tree, on Maxfield Avenue, in Richmond Park and New Kingston and disrupted operations at several buildings.

But Richard Nelson, senior manager of the Environmental Management Subdivision at the National Environment and Planning Agency, told The Gleaner that a joint investigation led by the health ministry was unable to conclusively determine the source or type of gas.

Nelson said that one theory – that cooking gas might have been emanating from a sewerage line – was dismissed after checks made with the National Water Commission revealed that that could only have happened if the infrastructure was tampered with.

“It is unlikely based on what we are picking up that it actually came from the manhole or sewerage system, so based on the discussion with the Ministry of Health who did the test and was on the ground, it is inconclusive as to exactly what it was, although we are saying it is leaning more towards cooking gas,” he said.

Nelson also indicated that there were no reports of anyone being adversely affected by the fumes, which he said had dissipated in the evening.

The investigation has been closed.

The Jamaica Fire Brigade, which participated in the investigation, along with the NWC and the Hazardous Substance Regulatory Authority, scurried from site to site responding to calls. Hotspots of concern included The Towers in New Kingston, the NCB Towers on Oxford Road, Webster Memorial United Church, the National Solid Waste Management Authority on Half-Way Tree Road, and the National Housing Trust on Park Boulevard.

The Ministry of Transport and Mining and National Works Agency were also affected.

At the NCB Towers shortly after 1 p.m. on Tuesday, a number of workers, mainly from the Concentric call centre, stood in a safe zone on the property after evacuating their office on the 11th floor. At that time, a gas-like odour was still present.

The property manager at the NCB Towers, Roland O’Connor, said he had been getting reports from as early as 11 a.m. Checks on both buildings indicated that the environmental hazard was external, he said.

Over at the NHT office on the Development Bank of Jamaica compound, workers who had evacuated the building were seen leaving after they were advised to go home.

Kevin Haughton, the deputy commissioner in charge of operations, said the brigade had responded to a number of calls and had checked the buildings but had not given administrators clearance for workers to return inside.