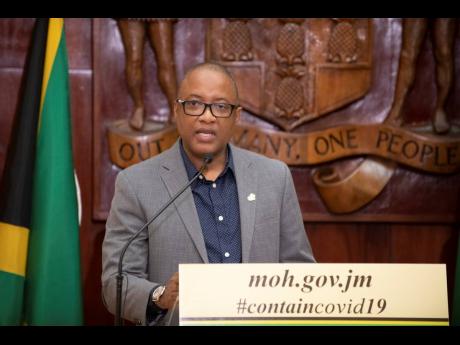 In an unswerving defence of his stewardship, the Ministry of Health and Wellness’ chief accounting officer Dunstan Bryan declared on Wednesday that his officials and staff did not veer from the Government’s policy of administering the Pfizer vaccine to both children and parents but had, in fact, carried it out to the letter.

Bryan, who is permanent secretary of the ministry, told members of a parliamentary oversight committee that health officials were troubled by suggestions that they flouted government policy and were derelict in their duties.

Juliet Holness, member of parliament (MP) for St Andrew East Rural, on Tuesday questioned whether health ministry workers had deviated by administering the Pfizer jab to adults also when the inoculants were initially intended for 12- to 18-year-olds.

Bryan, however, was determined to set the record straight.

“That policy direction was very direct in that the Pfizer vaccine was to be prioritised for children 12 to 18 years old. However, parents and guardians who accompany the children were also to be afforded the opportunity to be vaccinated with Pfizer,” Bryan told lawmakers.

“I am very clear in my mind about the policy direction that is provided to the Ministry of Health and Wellness, and so I understand the member’s frustration. However, we are guided by policy,” the senior ministry official insisted.

Bryan further argued that the policy direction was around prioritisation for children but not exclusivity.

However, Holness countered as she questioned why the significant volumes of AstraZeneca and Johnson & Johnson vaccines were not deployed to sites where children were receiving Pfizer so that adults could be given those vaccines.

Holness lamented that the ministry had to “throw away” almost 60,000 AstraZeneca doses at the end of September, which she said could have gone into the arms of adults.

Bryan sought to remind the committee that the priority of the vaccination programme in its entirety was to inoculate seniors aged 60 years and above who were deemed to be among the most vulnerable to the respiratory illness.

He said that while children had been prioritised for Pfizer, it did not “discredit the first function of a vaccination programme, which is to protect the most vulnerable”.

Bryan said the ministry had to make a decision as to whether it should deliver a double jab to 100,000 people or vaccinate 200,000 Jamaicans with only partial protection amid a deadly third wave that started in July.

However, Holness argued that she had not seen a vigorous push by the ministry to encourage Jamaicans to take up AstraZeneca and Johnson & Johnson.

“If we create the perception that Pfizer is the Clarks of vaccines, how do we go back to pushing AstraZeneca and Johnson & Johnson, which we know are good vaccines?” she asked.

In another development during the PAAC sitting, Bryan signalled that a fall-off in demand for COVID-19 vaccines was the biggest challenge now threatening to derail the Government’s target of 65 per cent herd immunity by March 2022.

The senior technocrat at the health ministry told members of the oversight committee that the ministry was only able to inoculate 4,000 persons across the country on Tuesday.

He said that for the March target to be achieved, at least 15,000 Jamaicans would have to receive the jab daily.

Health officials revealed that another 268,280 doses of the AstraZeneca vaccine were set to expire by the end of October.

However, Chief Medical Officer Dr Jacquiline Bisasor-McKenzie told committee members that approximately 170,000 Jamaicans were due second doses of AstraZeneca by the end of the month.

At the end of November, another 100,000 doses of AstraZeneca will expire.