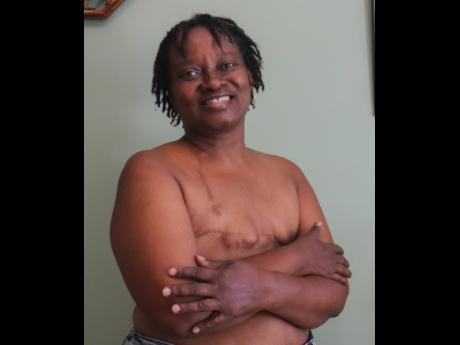 Ashley Anguin/Photographer
Breast cancer survivor Hope Johnson says she tries to motivate other patients to press on through the pain. 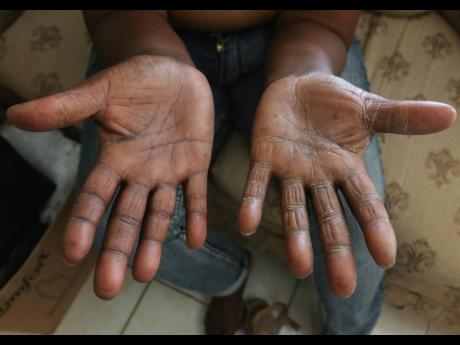 Ashley Anguin/Photographer
Hope Johnson shows side effects of chemotherapy treatment, which resulted in the stripping of her hands. 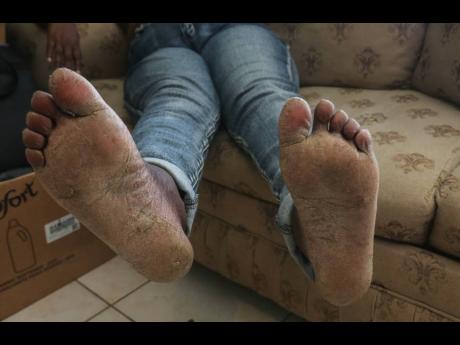 Despite facing major health challenges as she battles through several courses of treatment for breast cancer, 55-year-old Hope Johnson is facing her difficulties with a smile while seeking to be the poster girl for survival.

The Cornwall Courts resident, who is currently undergoing chemotherapy, visits the hospital every three weeks and is ready with a word of encouragement for persons who sit beside her and ask how she has fared amid the personal crisis.

“I say, ‘Even with the pain and the changes happening with my body, I still smile through it, and I trust the Almighty,’” she said during an interview last week.

Johnson, who has endured heart damage, high blood pressure, and diabetes throughout her fight against breast cancer, outlined a challenging journey that began seven years ago. Both breasts were removed over a three-year period.

The pangs that alerted her began one morning in October 2014, as she felt a burning sensation under her arm. Later, Johnson’s sister checked under her arm and discovered a lump.

After having a biopsy done, she got the chilling news that she had Stage Two breast cancer.

She had three options: undergo a mastectomy to remove the affected breast; surgically remove the lump; or face radiation and chemotherapy to shrink it. Johnson decided on the mastectomy – a decision she figured was the best long-term option and the most life-defining one.

“I made up my mind [that] I would have to get rid of it because I want to live,” Johnson told The Gleaner. “Even though I was sad and it brought tears to my eyes, in the back of my head, I said that this is what I have to do.”

Following the operation, Johnson has put her optimism to work by bringing cheer to her fellow cancer patients at the hospital.

“At one time, I remember my sister coming to visit, and she said, ‘But stop! Patient taking care of patient?’ And I said, ‘Well, yes, we have to cheer up each other and help each other,’” said Johnson.

But the struggle for Johnson was not over, as just three years later, she had to face a fresh cancer diagnosis that led to her having to remove the other breast.

Johnson said she had to endure numerous side effects from her chemotherapy treatment and medication, including the onset of diabetes. However, she resolutely decided to be stoic through the pain.

Like many cancer warriors, the scars of war were harrowing. She lost her hair and sense of taste. Her nails turned black. Pimples surfaced on her leg and belly, causing excruciating pain when they burst.

These days, while she continues her chemotherapy, Johnson keeps herself active with household chores and maintaining a moderately healthy lifestyle.

She has tweaked her consumption pattern, exercises occasionally, does a bit of gardening, and plays with her dogs. Comfort food like ice cream also offers a dose of therapy.

Johnson wants others who may be similarly affected by cancer to know that they, too, can be survivors.

“I would tell persons not to give up. Cancer is not a death sentence, so you can fight through it,” she said.

“You must pray, eat a balanced diet, exercise, and make sure you do what you love to do. So, if you love to dance, then keep dancing.”