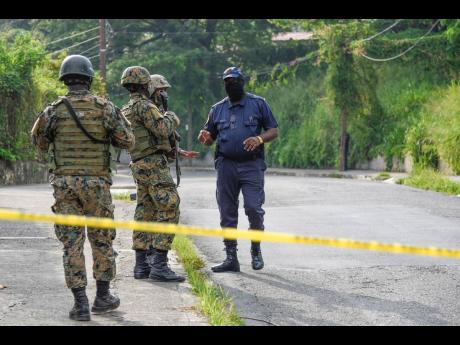 Nicholas Nunes/Photographer
A cop engages in dialogue with soldiers at the scene where reputed gang leader Christopher Linton, more popularly known as 'Dog Paw', was shot and killed in an alleged confrontation with the police in Elletson Flats, eastern St Andrew, on Monday.

The August Town police are on high alert following the shooting death of feared gangster Christopher ‘Dog Paw’ Linton on Monday, suggesting that it is unlikely his cronies will turn a blind eye.

Sub-officer in charge, Inspector Stephen Taylor, told The Gleaner that the security forces were bracing for a flare-up of violence as gang members once led by Linton may seek blood.

Linton was head of the Dog Paw Gang which, police said, launched a reign of terror in Bedward Gardens, August Town, and Tavern for years.

“There are a lot of persons aligned to him, and losing a leader means that people will strike back to show that they are not pleased with what happened,” said Taylor.

Linton, who was released in April after his shooting and firearm convictions were thrown out by the Court of Appeal, was cut down during an alleged confrontation with the police in the relatively quiet community of Elletson Flats, metres away from The University of the West Indies, Mona Campus.

Linton was sentenced to 15 years’ imprisonment in 2013 on the two charges. However, they were to run concurrently.

Taylor told The Gleaner that the consensus among scores of residents is that Linton needed to go.

On Monday, Deputy Commissioner of Police Fitz Bailey, who heads the Jamaica Constabulary Force’s Crime and Security Portfolio, said he had been implicated in several murders and shootings since his release from prison in April.

Sources with knowledge of Linton’s operations in and around Bedward Gardens confirmed police reports that he had stirred up trouble upon his return to the community and was seeking to reassert his power in other neighbourhoods.

“People glad him gone, man. Him come back a try take over the people them community and a influence the likkle boy them,” one resident, who asked not to be identified because of security concerns, said.

According to the resident, Linton also sought to eliminate perceived competition for area leader, reportedly ordering hits on rivals.

A neighbouring resident, who also did not want to be named, said, however, that some of those largely affected by Linton’s criminal activities are still uncertain about the consequences of his killing.

“We’re not aware of all the information yet. When the dust settles and we hear what is what and more information surfaces, then we can speak more clearly to the possibilities of retaliation and reprisals,” the source said.

“But speaking off the bat, it (Linton’s death) should be a good thing in relation to reducing the violence, providing that everything else remains equal,” the resident added.