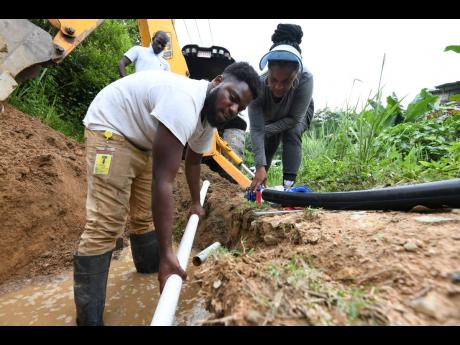 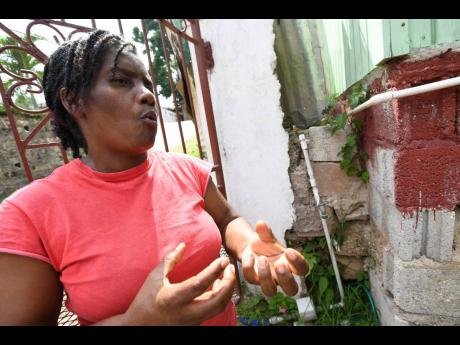 Rudolph Brown/Photographer
Karen Nelson, a resident of Unity in Lawrence Tavern, is concerned that she is still being billed for water despite not having the commodity flowing through her pipes in almost two months. 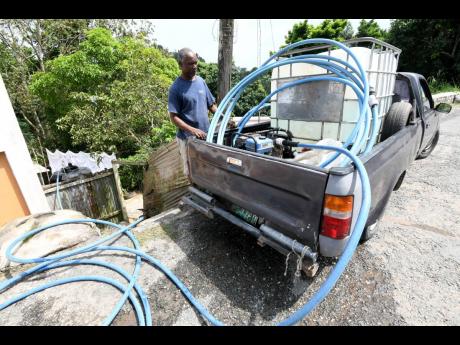 Rudolph Brown/Photographer
Lesley Williams has been selling water to residents of Lawrence Tavern, who are experiencing dry pipes.
1
2
3

While not yet out of the woods, residents of Unity and Fern Hill in Lawrence Tavern, St Andrew, have been breathing a sigh of relief as they now have access to a more regular supply of water flowing through their pipes.

The waterflow, which is supplied once per week, has given many residents the opportunity to replenish drums, tanks and other containers, sparing them the expense of purchasing water from trucks.

However, while pleased with the progress to address their long-standing water troubles, they are concerned that the current infrastructure is unable to manage the pressure from the newly installed water pump, resulting in burst pipes and water flowing along the roads when the line is engaged.

Lesley Edwards, a resident of the community for more than 30 years, said that they have been able to access piped water within the last two months.

Yet, since the National Water Commission (NWC) has improved the system by installing a new water pump, “three-quarter of the water gone down the road”, he told The Gleaner.

A nearby shopkeeper believed the rupturing of the pipes is due to a lack of maintenance.

But while some of her neighbours are celebrating, Karen Nelson lamented on Monday that while she has been without water for about two months, she is still being billed by the NWC.

“Me like pay fi wah me get, enuh, and things rough, so me a go pay for something weh me nah get?” she questioned.

St Andrew West Rural Member of Parliament (MP) Juliet Cuthbert-Flynn told The Gleaner last Thursday that she anticipates that the $789-million Essex Hall water project will get off the ground next year to ease some of the troubles.

The project, which was originally slated to begin early this year, has been delayed due to the pandemic.

“It was already in the Budget, but as you know, COVID has kind of derailed a lot of things,” she said, adding that she has been assured by NWC President Mark Barnett that the funding is still in place for the project.

Cuthbert-Flynn described the water crisis being faced by many residents of the area as “a serious problem” as the current infrastructure can no longer supply the consistently growing and developing population of over 10,000 people.

She said that the Essex Hall upgrading project will allow for all residents of Lawrence Tavern to be consistently supplied with the commodity.

The MP added that the NWC is currently installing meters and changing out old pipes to accommodate the transition.