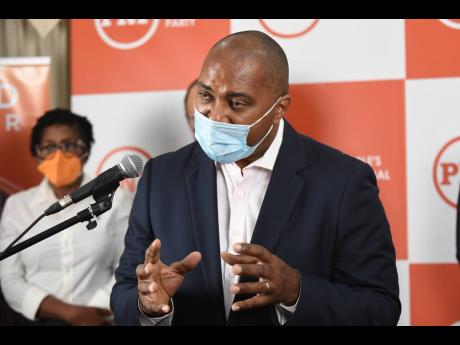 Kenyon Hemans/Photographer
Julian Robinson, opposition spokesman on finance, addresses a press conference at the Office of the Leader of the Opposition on Monday.

Transport and Mining Minister Robert Montague is to face questions from the parliamentary Opposition as to whether he still has confidence in the board of the Airports Authority of Jamaica (AAJ) after it dispensed with government regulations and invested nearly a half-billion dollars in start-up First Rock Capital Holdings.

“Is the Government protecting members of the board because of who they are?” Julian Robinson, the opposition spokesman on finance, asked on Monday during a People's National Party press conference at the Office of the Leader of the Opposition in Kingston.

“There is running, ducking, and hiding. Montague has totally ignored this pressing issue,” he said, referring to 'topanaris Labourites” among those who might be scrutinised.

Robinson told journalists that he would be having a discussion with Mikael Phillips, who shadows the transport portfolio, to pose questions to Montague, who has been silent on the issue since his colleague minister, Dr Nigel Clarke, placed the ball in his court four months ago.

A Gleaner investigation has found that the AAJ Group invested taxpayers' money in First Rock despite an initial board recommendation against the move.

Clarke, who is the minister of finance and the public service, stated in July that the AAJ violated government regulations in its $443-million investment in First Rock.

Under the 2017 Public Bodies Management and Accountability Act (PBMAA) regulations, a public body must get the finance ministry's permission before investing in a private company that is not listed on the Jamaica Stock Exchange.

“Prior approval was neither sought nor received … . This would have been contrary to regulations,” Clarke said in July as he responded to questions in Parliament from Robinson.

Robinson said that the AAJ board should have been fired by its portfolio minister for the breaches that occurred.

“Any self-respecting board should have resigned; you should not have waited on a minister to tell you to leave,” he said, noting that the finance minister had declared that the board violated its own investment law.

“This Government has talked a good talk about accountability but when it comes to action, there is none,” he said.

The opposition spokesman expressed surprise that Montague made three statements on other areas of his portfolio in Parliament two weeks ago, but remained mum on the AAJ issue.

Probed by The Gleaner on the issue last Friday, Montague declined comment.

Turning to the Nutrition Products Limited (NPL) scandal, Robinson lamented a decision by the Government to retain some members of the board. The auditor general declared in a recent report that the board failed in its oversight responsibility and review of the achievement of NPL's mandate.

Gilzean told The Gleaner recently that his lawyer had advised him against commenting on the audit.