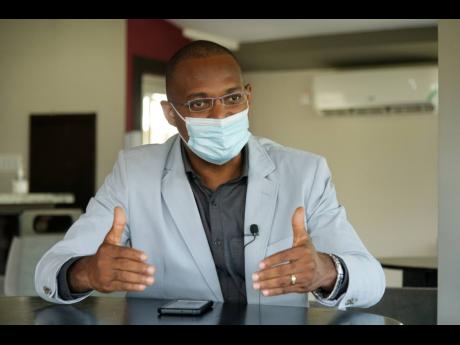 Joseph Patterson’s United Independents’ Congress (UIC), Jamaica’s third registered political party, has unveiled a far-reaching social agenda, including the championing of abortion rights. Patterson explained that his party is anchored to the...

Patterson explained that his party is anchored to the libertarian belief of protecting individual freedoms while maximising autonomy.

“The philosophy of the UIC is that every single individual has a right to be free and that, therefore, the only moral justification of Government is to protect the life, the liberty, and the property rights of every citizen equally,” the UIC president told The Gleaner in an interview on Friday.

Patterson’s expansive vision of individual rights is likely to have fuelled his resistance against Jamaica’s aggressive vaccination campaign amid the coronavirus pandemic.

He was charged with breaches of the Public Order Act and the Disaster Risk Management Act after spearheading a protest on September 22 against the call for compulsory vaccination. Patterson has also been slapped with charges relating to a public march and alleged mask-wearing breaches.

Abortion is a thorny issue in Jamaica’s deeply conservative religious heartland where Bible-believing Christians have challenged those assertions.

Government Member of Parliament Juliet Cuthbert-Flynn tabled a motion in the House of Representatives in 2018 for an amendment to the law allowing women to have safe abortions.

There has also been a call for a conscience vote on the matter.

“We believe that it is a personal choice. We don’t think that the Government should get involved and try to dictate what you do and don’t do,” said Patterson.

“It must be personal, it is a family matter, it is very delicate, so we want to make sure that we protect the rights of the individual and the family to make that choice.”

The UIC has become the first mainstream political party to adopt such a socially progressive position, which may make it less attractive to traditional voters. Third parties have had several unsuccessful campaigns in Jamaica, with the electorate divided between the ruling Jamaica Labour Party and the opposition People’s National Party.

Patterson has proposed a youth employment programme that ensures that every child leaving high school who is unable to matriculate to college will automatically be enrolled in paid apprenticeship programmes.

Access to training is key to making young people less amenable to recruitment into gangs, he said, adding that those enlisted would not leave the programme until they found suitable employment. He did not divulge how that would be funded.

The UIC is backing the overhaul of the education sector, proposing a school-choice programme in which public funds would be designated to students individually, allowing for funding to be transferable to whichever institution parents select for their children. That model would not be limited to public or private schools, Patterson said.

“The Government will fund individual students, so it is a different model. We are not going to give money carte blanche. We are going to fund the student. The parent decides where the student goes, the schools decide what kind of schools they want to be,” he told The Gleaner.

The party believes that this decision will allow for the Government to focus on monitoring and regulating the education sector while reducing political interference on school boards – a vexed matter for decades.

He believes that a similar policy framework of individualised funding for patients is viable in the health sector.