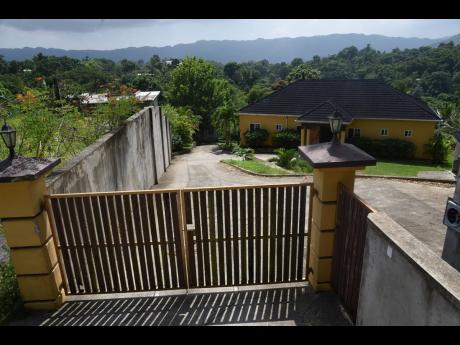 Ian Allen/Photographer
The rural home of Owen Ellington, the retired police commissioner, where an alleged burglar was confronted by the security forces on Monday. The would-be burglar was killed.

The brother of retired police chief Owen Ellington is recovering from injuries he sustained in a confrontation with a man who was fatally shot during a reported break-in at the former commissioner’s Glengoffe, St Catherine, home.

Crime-scene tape and bloodstains at the entrance to the house were telling signs of the violence that unfolded on Monday night around 7 o’clock in the usually serene rural community.

The dead man has been identified as 31-year-old Andrade Davis.

It is alleged that Ellington’s brother, who is a district constable, attempted to open the front door when he was chopped on his left hand by Davis.

Both men were taken to Linstead Hospital, where the alleged burglar was pronounced dead.

Jamaica Defence Force soldiers were summoned to the scene while Davis, who was armed with a machete, was still reportedly acting dangerously.

Residents claimed that more than a dozen explosions were heard.

The members of the security forces have been removed from front-line duties pending counselling and administrative review.

The firearms involved have also been taken for inspection.

Ellington was reportedly not at the house at the time of the incident and declined comment on the matter when contacted by The Gleaner on Tuesday.

The Independent Commission of Investigations has been notified of the incident.

Residents of the St Catherine district said that they knew the alleged perpetrator.

“The youth used to live roun’ here but him leave and deh a town and come back,” a resident, speaking on condition of anonymity, said on Tuesday.

Further reports reaching The Gleaner indicate that Davis was recently in custody on a charge of simply larceny.

“Him known fi bruck house and steal any likkle thing, bottle, or dem t’ing deh him known for stealing,” said a source close to the investigation.