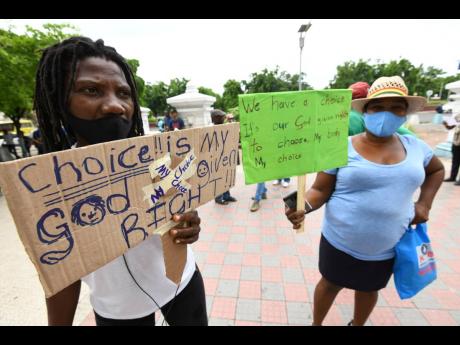 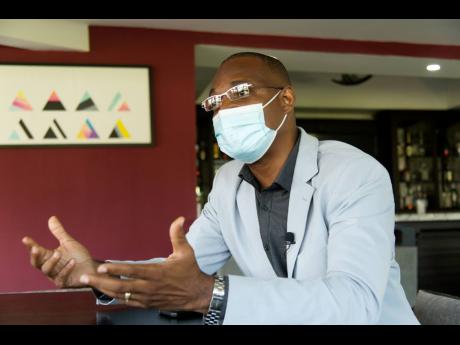 Growing advocacy for the implementation of mandatory vaccination should be resisted by Jamaicans because it trespasses on their constitutional rights, says controversial leader of Jamaica’s fledgling third registered party, Joseph Patterson....

Growing advocacy for the implementation of mandatory vaccination should be resisted by Jamaicans because it trespasses on their constitutional rights, says controversial leader of Jamaica’s fledgling third registered party, Joseph Patterson.

Patterson has found himself on a collision course with the Government after he was arrested last month at a pro-choice protest in downtown Kingston for breaching the Disaster Risk Management Act (DRMA). He is facing several charges.

His United Independents’ Congress (UIC) has categorically rejected the Government’s current COVID-19 policy, charging that his political position is based on protecting individual freedoms and promoting public education.

“The UIC is not anti-vax or pro-vax; we are pro-choice. So we are leading a protest action across the nation to really sensitise Jamaicans to the need to stand up and to fight for their rights as individuals, to make the choice especially about their bodily autonomy,” Patterson said in an interview with The Gleaner on Friday.

His party has also weighed in on the decision taken by several companies to introduce vaccine mandates for their employees.

“We don’t want a Jamaica where the Government or employers dictate the medical treatment that a person takes. When it comes on to your body and when it comes to medicine, it is a personal decision, so we want to encourage all Jamaicans to be aware of this,” he said.

Patterson added that the UIC believes that Jamaicans should be exposed to a “free market of products and a free market of choices”.

This approach is likely to cause tension between the Patterson’s UIC and the administration, as last week Thursday, Prime Minister Andrew Holness indicated during a tour of inoculation sites in Clarendon that his Government was contemplating the viability of a vaccine mandate.

“There will come a time when we will have to insist upon persons taking the vaccines or be restricted in certain ways. I have already sounded that warning,” Holness said.

Jamaica’s immunisation campaign has sputtered along since the first doses of Oxford-AstraZeneca were administered on March 10, leaving it behind the vast majority of the Caribbean on per-capita take-up.

Approximately 11 per cent of the Jamaican population – 322,796 people – were fully vaccinated according to the Ministry of Health & Wellness’ online tracker as at 7 p.m. on Tuesday.

Private-sector interests have increasingly been imposing mandatory vaccine compliance at workplaces, with pricey negative COVID-19 test results required regularly as the only alternative. Despite the Jamaican Bar Association arguing that a compulsory vaccine policy was defensible in the court, the Ministry of Labour has insisted that there is no scope in law for mandating the action.

Describing the Holness administration as “dictatorial” and “draconian”, Patterson criticised the series of lockdowns and curfews deployed to curb the outbreak.

He believes that the measures are insensitive and hurt the most vulnerable in society who live from hand to mouth.

“So I led the walks for liberty and the march on Gordon House for those people, for their voices to be heard, and for Jamaicans around the world to know the plight of Jamaicans here and how their own Government has appeared to become their enemy,” said the UIC president.

Patterson has vowed to challenge the constitutionality of the DRMA as an encroachment of the 2011 amendment to the Constitution, which gave birth to the Charter of Fundamental Rights and Freedoms.

The UIC leader is advocating for the removal of import duties on pharmaceutical supplies and other treatment options doctors may want to prescribe to tackle COVID-19. He also believes that doctors should not be “blacklisted” for lobbying for the controversial drug Ivermectin.

“What we got was a salesman government focused on a single solution and ramming that down to the people instead of looking at early treatments,” he told The Gleaner.

Ivermectin is an anti-parasitic drug that some medical professionals and private-sector groups have touted as an effective weapon in the arsenal against COVID-19. Among its high-profile cheerleaders are Dr Andrew Manning, immediate past president of the Medical Association of Jamaica, and obstetrician-gynaecologist Dr Michael Abrahams, a Gleaner columnist and public commentator.

However, the World Health Organization has maintained there is no conclusive evidence of its worth in treating COVID-19.

Patterson has also called for the establishment of a public emergency council comprising the leadership of Jamaica’s political parties as well as medical and science professionals.

He has criticised physicians for emphasising that 90 per cent of persons hospitalised have been unvaccinated, citing that as a contrived statistic because that comports to the national take-up rate.

That sort of campaign, he said, is tantamount to “fearmongering”.

“We need to stop that. We need to have a more transparent and objective way of dealing with each other that doesn’t try to scare people, or bribe people, or force people or coerce people into taking something that they may not want to take,” said Patterson.