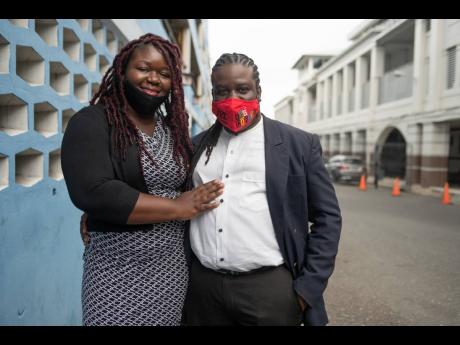 File
Sherine Virgo and her husband Dale Virgo outside the Supreme Court in Kingston.

The dreadlocked couple who were last year dealt a blow after the Supreme Court ruled that Kensington Primary School did not breach their child’s constitutional rights when it reportedly denied her access in 2018 on account of a similar hairstyle will today resume their fight in the Court of Appeal to have the decision overturned.

The case, which had sparked public outrage on perceived systemic prejudices against the Rastafarian culture and Afrocentric hairstyles, will no doubt reignite debate.

The defiant couple, Dale and Sherine Virgo, had challenged the St Catherine primary school’s grooming policy after the administration had threatened to withdraw their child’s admission if the then five-year-old student’s hairstyle remained.

The school had justified its position on the basis that it found that the hairstyle harboured lice and ‘junjo’ (mould) infestation.

However, the Virgos, who refused to cut their daughter’s hair, instead filed a lawsuit against the school’s board, the education ministry, and the attorney general arguing that the child’s constitutional right had been breached.

But Justices Sonia Bertram-Linton, Evan Brown, and Nicole Simmons ruled that Kensington Primary School did not breach the child’s constitutional rights when it denied her access.

The court had also ruled that Dale, who was listed as the first claimant, had no right or capacity to bring the claim.

The claimants, however, had sought a number of orders from the court, including a declaration that the contentious grooming policy excluding dreadlocks was unconstitutional and breached the claimants’ rights to freedom of expression, equality before the law, freedom from discrimination on the grounds of race, place of origin, social class, colour, religion or political opinions, among other reasons.

But the Court of Appeal judges in their ruling had indicated that the matter was not about religious rights and freedoms, but self-expression.

According to them, the case was about a desire to have acceptance and accommodation of what is believed to be “a right to individual expression of a conscientiously held belief, based on a decision taken by an individual and their family, about their chosen mode of self-expression.

“This, in and of itself, is a bold and generalised statement, which, if taken at face value, has innumerable implications for the length and breadth of self-expression that should be allowed in our schools,” they wrote.