Graphic accounts of child abuse a rallying cry for change 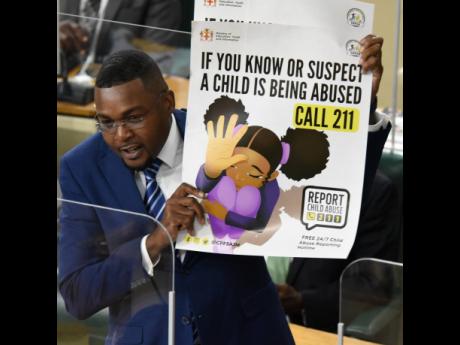 Ian Allen/Photographer
Robert Nesta Morgan, state minister in the Ministry of Education, shows a child-abuse poster in Parliament on Tuesday. The Clarendon North Central MP was making his debut contribution to the State of the Constituency Debate.

Sharing horrific anecdotes in an address to Parliament on Tuesday, State Minister Robert Morgan described child abuse as “one of the biggest threats to Jamaica today”.

Morgan, whose portfolio responsibility in the Ministry of Education, Youth and Information includes children’s affairs, said that the Government is setting the stage to significantly improve the standard of care in children’s homes, including by crafting new legislation.

“As much as it’s difficult for me to admit, being the minister of state, I had to confront the trauma in my constituency, and in the ministry, of the significant instances of abuse,” he told lawmakers.

Morgan, who was making his contribution to the State of the Constituency Debate, said that the abuse crisis has prompted his ministry to bring forward amendments to the Child Care and Protection Act and other relevant legislation.

“We had a baby who had 46 fractures, not more than three (years old). I have a story of a mother actively and physically participating in her boyfriend raping her child,” he said.

Morgan also reported an incident where a children’s home employee beat a ward so badly that the police had to be called in. When questioned as to why he had not reported the matter, the boy’s response stunned the cops.

“Mi used to dem things yah, so it happen a mi yard, so mi never expect it to be different,” he is quoted as having said.

The state minister, whose Clarendon North Central constituency has three children’s homes, said he is on mission to change the culture of abuse which has been normalised as integral to disciplining children.

Morgan said that the Cabinet note for the Maxfield Park Centre of Excellence was ready and en route to the attorney general’s office, along with amendments to the Child Care and Protection Act.

He admitted that the state-run facility has had a mixed history.

“Maxfield Park has a history of success and abuse. ... We want to make Maxfield Park a centre of excellence and as such we are going to form a task force that is going to use Maxfield as a template as to what a modern childcare facility in Jamaica should be,” the state minister said.