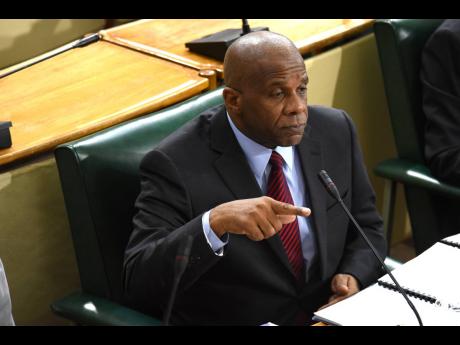 That was the impassioned defence by Greg Christie, executive director of the Integrity Commission, who has bristled at public perception that the corruption watchdog’s officials are living high off the hog doing nothing amid calls for progress updates on investigations.

But that disclosure by Christie on Thursday seemed to do very little to nudge some members of the Oversight Committee for the Integrity Commission into making the necessary amendments to the gag order.

Christie said that the fundamental change would breathe new life into the anti-corruption body and counteract concerns that the commission was ineffective..

Citing Jamaica’s ranking on the global Corruption Perception Index, Christie reiterated the commission’s concern about the gag clause in the Integrity Commission Act that prevents the body from even confirming or denying that it has launched investigations.

“That is one big reason for the undermining of the confidence on the part of the public in our national and public institutions – Government, Parliament, and the anti-corruption institutions and law-enforcement institutions of the State,” said the executive director.

“People assume that we are comatose. We don’t exist, we are taking a salary, and we’re doing nothing because they can’t hear from us,” Christie appealed to the Edmund Bartlett-chaired committee.

“We have very low trust levels in terms of our ability to hold public officials accountable, so I support an amendment but ... I don’t believe there should be any details of an investigation said publicly. But I do believe it is important to confirm or deny that you have started,” Robinson said.

However, St Andrew North East MP Delroy Chuck took issue with the commission’s position, insisting that its officials were overplaying the argument of legislative restraint.

“What is prohibiting you, once you have reported to Parliament, from releasing the information? Nothing is wrong in you reporting to Parliament that the allegation made by X against Y. The public official is under investigation,” he charged.

Chuck, nonetheless, defended the gag order clause, to which he was a signatory.

Cheekily referred to as the ‘Christie clause’, it is believed to have been imposed to prevent a repeat of the full-throated exposes by Christie in his former role as Jamaica’s contractor general.

Christie was praised for his fearlessness in some quarters but earned the wrath of legislators and others amid accusations of being cavalier and reckless.

“I sat on the committee. We agreed to it because we felt that comments just to say that an investigation has been initiated were highly prejudicial and very often the prejudice caused to the person is not removed, even when the commissioner reports that nothing is wrong,” Chuck, the minister of justice, said on Thursday.

But Christie countered: “The section says that you can’t speak to anything until it gets to Parliament, but the very Parliament that has written that law reserved to themselves the power to make allegations about corrupt conduct and ask the authorities to start investigation … .”