Mom in mourning as 17-y-o gunned down 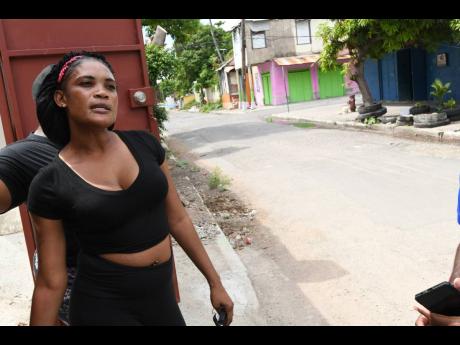 Rudolph Brown/Photographer
Sharna Lee laments the murder of her 17-year-old son, Rohan Murray. He was gunned down on Fleet Street in Southside on Wednesday night.

Three weeks shy of her son’s 18th birthday, another Central Kingston mother is mourning a brutal murder after warning his elder sibling of the omens of crime. Shortly before 8 p.m. Wednesday, armed thugs chased and shot to death 17-year-old Rohan...

Three weeks shy of her son’s 18th birthday, another Central Kingston mother is mourning a brutal murder after warning his elder sibling of the omens of crime.

Murray’s 19-year-old sibling was held by the police earlier this year on the same street and charged with illegal possession of firearm and ammunition.

Their mother, Sharna Lee, raised both sons in the gritty Southside community where crime is rampant and bloodletting between the Genaside and Darkside gangs has stoked division, despair, and fear. More than a dozen people have been killed in that small geographic space this year.

Lee said she was working in the countryside when she got the heartbreaking call that Murray had been killed.

Murray would have turned 18 on November 4 and plans were being made for the teen to migrate to the United States.

Lee described Murray as a party lover and ladies’ man who revelled in jokes and laughter.

“Him jovial and him hardly talk. Him never yet disrespect me or bring him mouth to me. I swear! We have da bond deh,” she said.

The distraught mother believes that anyone could become a victim of the gang war in the community, adding that uninvolved people could get caught up in the spiralling violence.

Other residents told The Gleaner that Murray was not a troublemaker, even pointing to the incarceration of his sibling as a factor behind his death.

“When dem can’t find who dem really want, dem turn pon di innocent, so it has gotten worse, and it a guh lead from man to woman to child,” a resident said.

Southside has always long been ravaged by gang violence, but residents suggest that the current flare-up is the worst things have ever been.

Deputy Superintendent Linval Phoenix, who is in charge of operations in the Kingston Central Police Division, said the investigation into Murray’s killing was ongoing and that a motive had not yet been determined.

“There have been some tit-for-tat between Genaside and Darkside in recent times, so we are not sure yet as to where along the lines this particular murder falls. ... We hope to have a clearer picture as the investigation progresses,” he said.