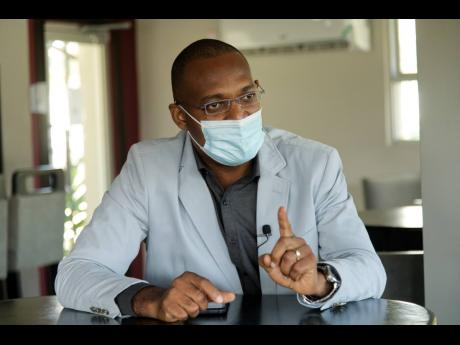 Gladstone Taylor/Multimedia Photo Editor
Joseph Patterson: “These two parties are simply there for power and to empower and enrich a few at the expense of the many.”

Shrinking the size of the bloated bureaucracy is a key pillar of Patterson’s economic vision for Jamaica, which includes tax cuts, land redistribution, and constitutional reform.

The United Independents’ Congress (UIC) has pledged to reduce the number of government agencies. Currently, there are around 140 government departments and agencies, which represents a decline of 22 per cent than the 180 that existed in 2016.

But Patterson believes that the pace of consolidation has not been fast enough.

“We have many, many, many boards. These are really political appointment opportunities. We need to get rid of these excessive boards and narrow the Government and focus on the area that Government should focus on and then put the rest back into the private sector,” Patterson told The Gleaner in a recent interview.

He is prioritising the reallocation of state lands to erode the high homeownership deficit that exists in the country.

About a third of Jamaica’s 2.8 million population are believed to be illegal settlers.

The UIC is proposing that Jamaica increase its housing density through the construction of high-rise developments, providing a residential model similar to Singapore’s. The southeast Asian nation offers high-density housing at subsidised rates.

“We also want to get rid of the Crown lands and divest those lands and put those lands in the hands of the people by making sure that every Jamaican family becomes a property owner … . Property owner does not mean a physical piece of land. It means you now have a home,” he said.

The party also believes that more lands should be allocated for agricultural use, especially for organic farmers. The party’s manifesto also outlines the elimination of property taxes and a reduction in GCT.

POWER TO THE PEOPLE

Patterson frames these positions as an attempt to redistribute power to the people as he believes that politicians have left Jamaicans in a state of “squalor” while living in “opulence”.

He disclosed that his party’s membership and funding have quadrupled over the last two weeks, buoyed by donations from Jamaicans locally and in the diaspora. However, he did not disclose membership or financing data.

Those monthly donations, he said, have been as small as J$1,000 locally and US$50 from the diaspora.

“Our party does not receive funding from the Big Business private-sector organisations that fund the two major parties and own them and own the media also. We are funded by the ordinary Jamaicans,” he said.

Patterson said that that grass-roots approach would insulate his party from being beholden to corporate interests as the other two political parties.

This position forms a major cornerstone of his party’s manifesto, he said. The UIC has also outlined a raft of constitutional changes in order to reduce the concentration of power in the hands of the prime minister.

The UIC is proposing a directly elected president, with three vice-presidents who represent, and are elected by, each county. Patterson also favours 14 elected senators representing each parish and ministers who are drawn from the public and vetted by Parliament.

“They are no longer going to be dependent on the party for money or for campaigning because we are now going to have a 100 per cent publicly funded campaign system that funds the individual who is running, giving him or her the same and equal platform for other candidates.”

He believes that it is “highly unlikely” that his party will not win seats when the next general election is due.

But history is not on Patterson’s side.

Several third parties have emerged in Jamaica’s post-Independence era, but their fortunes have crashed because of the electorate’s traditional preference for the ruling Jamaica Labour Party and the opposition People’s National Party.

Despite those daunting realities, Patterson is convinced that the Jamaican people are “much wiser” now than they were 77 years ago when the Jamaica Labour Party triumphed in the first polls under universal adult suffrage.

Electors have also learned from the 18-and-a-half-year reign of the PNP that ended in 2007, he said.

“They now see clearly that these two parties are simply there for power and to empower and enrich a few at the expense of the many. The UIC is going to destroy that system,” he said.

The UIC is preparing to field 228 candidates in the next local government elections due next year and 63 in the general election due in the next four years.