‘Only a mad man would not get the vaccine’ 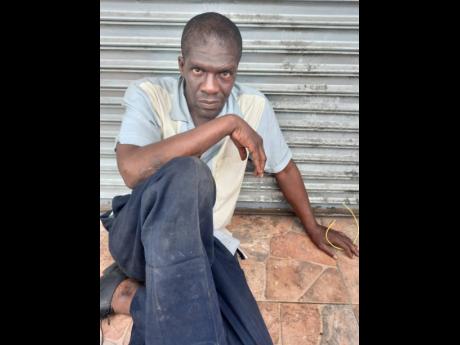 Photo by Mark Titus
Garth Lindsay has been living on the streets of Montego Bay, St James, for the past 15 years.

Forty-two-year-old Garth Lindsay has been living on the streets of Montego Bay, St James, for the past 15 years.

He left his hometown in Fellowship, Portland, in search of a better life, completing the 135-mile trek after five days, and today has no regret about his decision to head west.

Not a man of many words, Lindsay, who is also known as ‘Leo’, claims that all his relatives are living in the United States, but that was all he was prepared to mutter about his private life.

He was among the first 43 street people living in St James who were vaccinated last week, and he is happy that he got the jab.

“Only a mad man would not want to get the vaccine, but I wah live,” was his expressionless and abrupt response when asked the reason he chose to get vaccinated.

Lennox Wallace, parish manager of the St James Health Department, told The Sunday Gleaner that the exercise will continue on weekends until all of the street people willing to take the jab are vaccinated.

“The target is for the 235 homeless persons in St James to receive the Johnson & Johnson vaccine, but none will be forced,” Wallace said. “We will be working closely with the Poor Relief Department and CUMI, but I am satisfied with the response we got on Sunday.”

CUMI – the Committee for the Upliftment of the Mentally Ill – has been holding sessions with street people to discuss the pandemic and the importance of the vaccine, but no one was coerced to get the jab, it said.

“They made their decision and all we did was direct them where it was being done,” Nurse Joy Crooks, the administrator of the mental health institution, told The Sunday Gleaner. “But we have a few whose relatives have said that they do not want them to be vaccinated. Again, they make their own decision.”

In the meantime, Wallace said there has been a significant increase in the number of front-line workers that have taken the vaccine in St James. He also spoke of several partnerships with key corporate stakeholders to intensify the vaccination effort.

“Initially, we are at about 45 per cent, because people wanted to do their own research. But we are seeing a great take-up now,” he said.

Dr Delroy Fray, clinical coordinator at the Western Regional Health Authority, said that a survey is being conducted to determine how many nurses and doctors have been jabbed, but noted that fewer people are being hospitalised for COVID-19 across the region.

Last Wednesday, there were 39 new positive COVID-19 cases at the Cornwall Regional Hospital in Montego Bay, St James, while the Savanna-la-Mar Hospital in Westmoreland saw just under 20. The Noel Holmes Hospital in Hanover was numbering in the single digits, while, at the Falmouth Hospital in Trelawny where a field hospital is located, there were 40 new cases.

“There are still a lot of patients to be cared for, and COVID patients require a semi-ICU care. So we are kept busy, but these numbers are an encouraging drop from weeks ago.”

Fray said that the number of applications for sick leave from his staff has also decreased, another positive sign.